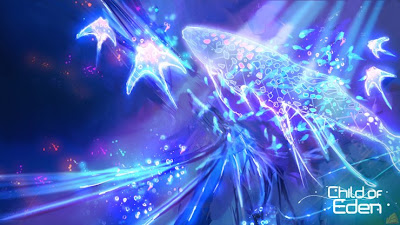 When Child of Eden was announced at E3 2010, it was showcased as an Xbox Kinect only game. And it looked really, really pretty. It is slowly creeping up on a year and they have announced a release date of sometime in the second quarter, aka April-June, or this year. Hurray! Though still not happy that it is Xbox only.

But what's this? According to the article, it'll be on the PS3 and Move compatible? After doing some searching, apparently the PS3 version was announced under the table by Ubisoft. They have a better stance with Microsoft then with Sony, so I can kind of see why showcasing it with the Kinect meant better opportunities for them. But great for me! I can play it now without needing to buy it for the 360. Did I mention that it is pretty?
Email Post
Labels: child of eden release date