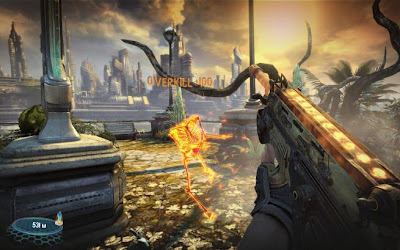 The title of the article I'll be referring to is just the start of the silliness. Is Bulletstorm the Worst Video Game in the World? If it's a CoD clone, yes. If you're just saying that because it's violent, then you should probably rethink your title.

With Bulletstorm releasing on February 22nd, of course Fox News felt like it was their duty to warn/scare parents away from buying this game. Or it's a great marketing tool to make more people aware of the game. Your call.

But the "experts" are the most amusing pieces to review. First there's Carol Lieberman, a psychologist, who claims that the increase in sexual assault can be highly attributed to video games.

And that's it. That's all she said. Nothing to back up that claim. She just said it. And I'm sure at least half of the people who have read the article and/or watched Fox News will take her word because she is a psychologist.

Then there is Dr. Jerry Weichman, a clinical psychologist at the Hoag Neurosciences Institute in Southern California. He sounds a tad bit more credible then Lieberman. His logic was more directed at younger children that playing Bulletstorm with the vast amount of violence and sexual innuendo can be harmful. Again, nothing to back up the claim, but if you're a parent that gives Bulletstorm to anyone under 17, you should rethink your parenting techniques.

While Fox News does provide the ESRB rating info and a response from at the Hal Levy with the National Youth Rights Association that plenty of "emotional unstable adults" can play the game and nothing will happen. I giggled at that too because really, who isn't emotionally unstable these days?

But what's Fox's shining beacong of light to resolve all problems? Why it's the Supreme Court! They are, of course, backing the law that California has been attempting to enforce. Not deliberately, but when you spend half of the article praising the law and getting "experts" to comment on it, you're basically saying you love it. And I love how they add at the bottom that they praise innovation and creativity, but they're willing to squander it all in the same breath.

So if you're in need for a smile, this article will cheer you up. If anything, the artist rendition of "Bulletstorm" is worth a chuckle.
Email Post
Labels: bulletstorm fox news