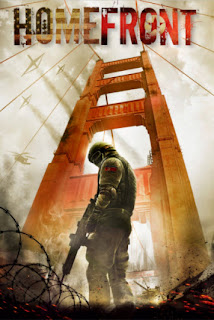 Right now it's just hear-say and forum banter. But after a few images and a YouTube video, some are speculating that THQ's new, and most popular pre-ordered game in history, may have been leaked early. The dev's are not having a good month. Even with the great pre-order sales, they are facing potential layoffs. Now their game might be out for free. For their sake, don't download it if you find it for free. Just buy it. Think about little Timmy when his dad gets laid off for people not paying for the game he worked 3 years on.

Homefront is a new FPS set in the future of the U.S. Think of it as Red Dawn with Korea. In fact, the man who wrote Red Dawn and co-wrote Apocalypse Now, John Milius, was in charge of the story. It's already caused a series of changes for the Japanese release to remove North Korean names/places, but it's one of the few FPS that focuses on a current, real-world possibility if we're not careful in politics. And it has pretty graphics, of course.
Email Post
Labels: homefront leaked thq