Blame the Games Not the Gamer 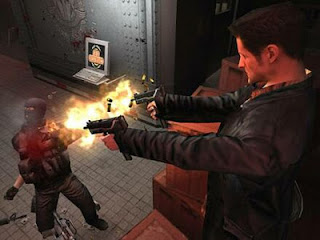 This is one of those thinking articles. Though I did chuckle when I saw the title "Blame video games for everything?" and then a picture of the EA Headquarters logo.

In summary for those who don't want to read, it asks people why some games such as GTA and Manhunt have been getting the blame for violence in people and others like Dante's Inferno slide under the radar. Basically if there is an issue with violence content shouldn't it be universal and not to one particular game? The writer states a study was made that video gaming was just as common as wearing sneakers, and trying to correlate one to another in the terms of committing a crime is silly. Now where that study is, I'm not sure, but the principles still apply to the point he was trying to make: just because you're wearing sneakers doesn't mean you are a criminal. Substitute sneakers for video games and there you go.

The question I wanted to discuss was this:

why are the other people who bought and played the game not mentioned?

Aka, why is the focus on the people who have been caught breaking the law and not the other 99% of the gaming populace that is totally normal?

Simple. The media likes violence. If it bleeds it leads and all that junk. As much as the news stations try to make themselves out to be better then "we are looking for the bad stories", the reality is that's what they show because that's what people want to see. In the last decade media reports on crime and violence have increased by 160%. Which is funny when you look at the national crime rate in the U.S. it's been pretty steadily declining, even in today's world of no jobs, no money, no food. The proportion of what's said on the news doesn't match with reality. 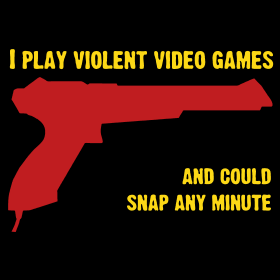 Some might argue that it's because we are a society influenced by violence, but if you look at just about every country in the world they all have a pretty bloody past. We had the Wild West, Cowboys and Indians, but I'm sure the Europeans would beg to differ that their feuds were more violent. But our news here in the U.S. is slanted to instill fear in us. And it works. It keeps us watching and buying all of the stupid crap that's out there to make us feel safe from everyone else.

That's why violent video games get a bad rep. Circumstantial evidence and fear created by the media. By all accounts, I should be the most violent human being alive. But I'm not. I get freaked out by a number of bugs and can't harm them. I can't even scoop them up into a cup to take them outside. Yeah, I'm a scary person. >.> Don't give me a game to play!

But media doesn't care about me. I'm too "normal" by their standards. They want to go after the criminals and want to know why. Their target is always against themselves, and video games are the newest iteration.

For further examples, check out news stories involving violent games, television, and movies as the key factor of blame, only to be found false later (and never reported any retractions!).


Edit: It just got hilarious. I never knew of this but apparently Final Fantasy 7 was claimed by some in the media to have influenced the Columbine High School shootings in 1999 after the scene with the bombing of the first reactor in Midgar. I shit you not. This takes desperation to a whole new level.

Please note I am not mocking the victims of that day or the incident itself. Rather the news and media are being made fun of here for their lack of sanity.
Email Post
Labels: news doesn't show normal gamers violent video games