What Do We Do Without G4? 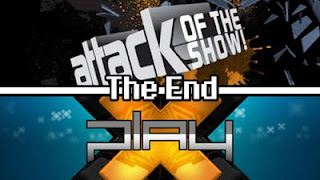 So it was officially official that G4 will be finished off in December and rebranded in 2013. There were murmurs, but nothing really concrete until last week (always talks of changing it up, but nothing set in stone). The 2 highest viewed shows, X-Play and Attack of the Show, will stay on until the end of their current run.
NBC Universal has decided that the channel will be “rebranded” to focus on the “modern GQ male”. Aka, women still don’t want to play video games or do the “boy” things. Thanks NBC for showcasing your sexism once again. Weren’t you the dumb-farts that booted Conan? Yeah. We have so much faith in your sensibilities.

From what I’ve been reading, it wasn’t an issue of ratings with G4, just simply wanting to be more “hip” with the likes of SpikeTV and SyFy. Yeah. SyFy is hip. Somehow. I’m working that one out in my brain too.

G4 was the offspring of TechTV after a merger (holy crap most of you probably don’t know how awesome TechTV was). And for a while, it was pretty good. I actually enjoyed XPlay and AOTS for a few years until it became more about pandering to top-billing companies, boobs, beer, and more boobs. They still offered some inside access to the events most of us dream about attending, like E3 and San Diego Comic Con. Even with the rise of the internet taking over most of those positions, their coverage was something a lot of us watched and got a geeky perspective of. It was good. For quite a number of us gamers, G4 was our portal into a larger world. It'll be weird come 2013 when I turn on my TV and no longer see their logo on my favorite's screen.

But now all of that is up in the air because, let’s face it. The GQ magazines of the world don’t do gaming. They don’t do geeky things. SpikeTV is now our outlet. Wow. That just hit me. I feel really f-ing depressed right now that if I want to watch anything gaming related on tv (which is almost never these days), I only have SpikeTV to turn to. That’s just…wow.

GameSpot, Kotaku, time to really amp it up. You have the ball.

Anyone else feel that Adam Sessler kind of knew this was coming? Not that I blame him. I still have a lot of respect for the Sessler. Nice guy too. Met him once. He doesn’t seem bothered talking to fans and is always up for a healthy discussion. Just don’t ask him what his favorite game is. He hates that question.
Email Post
Labels: attack of the show g4tv rebranding nbc universal xplay