Why all Sci-Fi games piss me off. Except Star Wars. 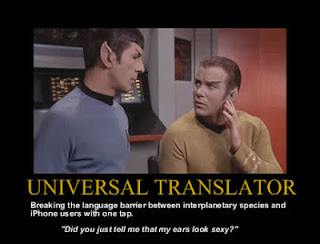 They are abused in Star Trek like nobody’s business. They started out in books, most notably Murry Leinster’s 1945 novella First Contact. The concept of the universal translator was to offer an instant translation of any language. It’s a pretty nifty idea when you think about it. Technology companies today are striving for such a device for more practical, every-day uses. So far Bablefish is the best.

Now universal translators allow us to understand what the other person is saying in their language. It doesn’t convert everything into your language. Well unless you have a little device that reads/repeats what the person says. It’s almost telepathic in a sense, in that it conveys the translation to your brain directly. You don’t have that time wasted with the program trying to translate for you and spit it back out. You just… know.

So why does it bug me in video games? Well this happens with most sci-fi television shows and movies. Everyone is speaking English for really no reason at all. There isn’t a “basic” language like it was laid out in Star Wars, which would explain why a number of aliens were using English. But there are still multiple languages, and aliens speaking in their native tongue, with an inherit understanding being directed to the brain (and subtitles for us normal humans who don’t have this power, yet).

The situation I’ve described doesn’t happen. Instead it’s just assumed that these translators are actually correcting the way other species are speaking. Which is implausible. The translators can’t physically change the way you speak, but somehow they do! So everyone in Star Trek, Futurama, The Last Starfighter, even Battlestar Galactica allows this to happen. Everyone is speaking American English for no reason at all. American’s apparently take over space in the future, because damn, we’re getting everyone to conform to our ways.

Listen. I don’t care what your qualms may be about Star Wars and what happened to the franchise, but I give them credit for having their own languages and a proper universal translator, with subtitles. I like seeing my Hutts speaking Huttese. It’s really flippin’ weird when they don’t. They tried that in one episode of the Clone Wars. People got annoyed and they didn’t do it again. At least not that I’m aware of. At least that’s what the Wookiepedia says…roll with it. But everyone is not expected to conform to one language. There are multiples with rich history and heritage, and they don’t get oppressed by “must be English only!”

Klingon’s have their own language, sure. We have a dictionary for it. But how often do they actually speak it in Star Trek? Not as often as you’d think. All Klingon’s know English, even with clan meetings they rarely speak their native talk. So it’s almost arbitrary that they use their own language.

Now I know some will use the translator as a quickie plot device to propel the story forward. People don’t want to watch the hero or heroes spend months learning a new language. What’s the best way to resolve it? Create a translator and everyone will be able to speak English. Done.

I get annoyed by the technical aspects of this issue. People don’t just speak English out of nowhere. No devices can, or could ever, exist that would force someone to speak English. I’m sure there would be a number of alien races where it’s just damn impossible to use any type of human language (from a biological standpoint-i.e. no tongue, lips, or vocal cords to replicate the speech).

Which is why I’m even more perplexed that video games deploy this same tactic. Does it keep the story moving, sure. But then we sit and question the logistics of it. Video games work in their own time frame. They don’t have to fit into the convention of a 2 hour film format or 30 minute television show. It can use any extraneous, crazy ass languages that developers come up with. Again I refer to Star Wars. KOTOR and TOR really emphasize the uniqueness of the languages of each species, with subtitles of course. But let’s look at SWG, and oh, I don’t know, all of the other Star Wars games not made by BioWare. They did a great job preserving the uniqueness of each alien language.

But then you have Halo, Lost Planet, Dead Zone, and myriad of others and you have to sit and wonder why. The Grunts in Halo do say “wort, wort, wort” but I’d compare them to the Klingon’s. They still speak English without a need. “Look out! They’re coming!”

So thank you once again Star Wars for preserving the native tongue of alien languages and keeping things logical. At least I appreciate it.
Email Post
Labels: science fiction games universal translators why does everyone speak English?