Origins: What Makes the Gamers/Person That We Are 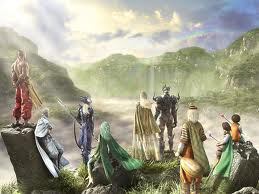 I decided to give Critical Distance’s monthly round table blogging topic a shot. The topic is “origins,” such as what are your earliest moments in gaming, if or how have they influenced your life, etc. Coincidentally, I started writing a piece on a similar topic earlier this month, but shelved it. I didn’t like where my mind was at and where the writing was going. So, we’re on to Round 2!

Oh so cheesy. Testing your might? Yep. That’s my childhood right there. I was the 8 year old that played Mortal Kombat back at Dan’s Arcade in downtown Chicago, IL. Of course we had to get the Sega Genesis version. It was a requirement. My brother and I would play for hours upon hours, perfecting every combo, and making sure we always did the most gruesome finishing move. Spinal Tap from Scorpion? Yes, please.

Before anyone gets up in arms about an 8 year old playing such a violent game, my parents were always there to supervise. In fact, they started it. I came out of the womb watching Apocalypse Now, China Town, and A Clockwork Orange. And yet, I’m really passive aggressive. I have enough trouble killing a fly. I could never imagine harming another person, or an animal outside of the bug zone. And no: no pleasure in killing the fly. I hate killing a bug every time, not from the gross out factor but because I care that they live their life. I’m very lucky to have the parents that I have. They have always been there to explain movies and games to me when I didn’t understand what was going on. They helped me realize very early in my life the difference between reality and fantasy. In doing so, they allowed me to explore so much creative freedom that most kids today barely see a fraction of. I’m incredibly thankful for them and allowing me to seek out media to my heart’s content.

See Jack Thompson. Kids can grow up to be outstanding, law-abiding citizens even when they play violent video games. You can go back to your cubby-hole now.

Now that I have that warning out of the way, Mortal Kombat is not my earliest of video game memories. It’s one of my more amusing since it was a fighting game I could beat my brother at. He was always better at Street Fighter and Virtua Fighter.

My earliest of earliest memories go all the way back to the Atari days, Pong, Frogger, and Pitfall. I don’t remember too much; it mostly revolves around my dad, brother, and I sitting in front of the television, joysticks in hand, watching the white ball bounce back and forth between our paddles as we happily tried to distract each other. They were simple games in comparison to the behemoths that are available today, but they were fun times. These weren’t just countless hours of fun, but months. Pitfall is a bitch if you’re not completely focused on it. We made it a game within a game if we couldn’t get past a section, such as “how many times can you get killed by a croc in 2 minutes.” I also remember being very inquisitive about the games. It wasn’t just pixels on a screen; I wanted to know how they were made so I would prod my dad constantly with questions. How did they make this? What does the machine do? Why is the joystick like this?

These were all when I was just a baby, maybe 2 or 3 years of age. But I feel it’s important to bring those incredibly early memories into play because of their influence on me when I was so young. Keep reading, I promise it’ll all tie in together.

What I really want to focus this post about is the game that helped define who I am today: Final Fantasy IV. Original IV, not the fake numbering system the U.S. versions started.

And no. I’m not going to issue a FF Fan Girl Alert. If it’s not obvious by my user name I’m a FF Fan. I’m an original fan at heart (which isn’t to say that newer gamers are not fans either. Let’s not go down that path, shall we). I started with the first game back on the NES and haven’t stopped. A friend’s father would travel to Japan a lot and would bring back games as gifts. That’s when we first got our hands on Final Fantasy. She would help with translations where needed, and we did our best to interpret the story. Not bad for 6 year olds, huh?

FF4 was the first game where I felt real emotion towards the characters, and I believe that’s why it stands out so much more than anything else I played as a kid. Yeah I remember the first time I unintentionally killed Bowser in SMB by doing this jacked up slip and slide move. Or the time when Link first pissed off some chickens and was pecked to death. Or the first time you “think” you have finished Ghosts n’Goblins only to realize that it’s the fake ending and you have to replay the entire game all over again. That one sucked.

There’s a magic to Final Fantasy IV that stands out above all of the other FF games. In its complex framework I developed relationships with the characters. It was the first time I remember feeling invested in their welfare. I was upset when they died in battle, or “died” in non-playable scenes and were removed from my party. I never cried, but I was really unhappy, particularly when it came to Tellah. That was just wrong and mean on so many levels that I had to stop and couldn’t pick up the game for a week.

At the same time, it taught multiple life lessons that I still carry with me today. The importance of friendship, believing in yourself when the world seems against you, and standing up for what’s right. I’ve never had any adult figure, school, or entertainer tell me how important it was to be me. I.E. I don’t have to conform to what society wants me to be. Video games allowed me to understand that it’s ok to be different. In fact being different is more normal then being the “normal” people expected out of me. Adults and schools wanted me to be smart, but also to be popular and have a lot of friends, and to be a girl that wears pink dresses all day, every day. Entertainers wanted me to be thin, and pretty (to their standards), and either be sugary sweet or a slut.

The characters in Final Fantasy IV were so diverse and unique, but they worked together to achieve their goals. How is that not a great message for a kid? It’s ok to be different and still work as a team. Schools, start teaching that. Whatever life lessons you’re trying to impart on us are not found on state tests.

Final Fantasy has always been about embracing individuals while creating teams to help for the greater good. 4 was the first time where I felt like the characters were well defined. They had names in 1, 2, and 3, but they were still best viewed as generic Warrior, Black Mage, White Mage, and Monk. 4 gave them depth, personalities, back stories that were rich in content, and events that had real world applications.

It was also the first game that I remember that felt tragic. People were “dying” left and right! They came back in the end, but as a kid that forced you to confront with a lot of things at an early stage. You don’t really consider death until a pet passes on. It gave me a lot to freak out about, and helped me to understand what the emotion was. It also allowed me to appreciate how precious life can be. We get too stuck in our routines that we forget how awesome the world is around us. FF4 allowed me to see that.

Tragedy also applies to the character’s personal quests. When you sit down and think about it, Cecil is one messed up hero. For all of the good he tries to accomplish, his friends are “dying”, the world is faltering, and he constantly struggles. I felt like that a lot as a kid, thinking I was doing the right thing by telling on a bully or helping clean up a mess. Instead it felt like a constant battle where something else went wrong by trying to do the good deed. Eventually you triumph, but that fight is something your parents and teachers never tell you about. Cecil, on the other hand, taught me what to expect. Doing something right doesn’t mean you get a cookie. Sometimes more bad things will be dumped on you. Eventually, if you keep going, karma will kick in and the good deed will be done.

It also allowed me to open up my heart and care for the villains. Hey. Golbez is not a bad guy. He was misguided and caved in. FF4 allowed the gamer a chance to understand the meaning of redemption. It wasn’t just a story about our heroes, but about Golbez as well. Once he understood his error, we find his true self coming back, a man who is caring and willing to sacrifice himself for good. Its proof that in reality, sometimes the bad guy can be good. Oh hey! Reck-It-Ralph is calling! Redeeming ones-self, no matter what the odds are, is possible. To make a bit more sense of this, what I’m trying to get at is don’t judge people at face value. Just because they may not have done something right the first time, it doesn’t make them a bad person. You need to open your mind and your ears and understand who they are. You might be surprised how wonderful some people can be if you give them a chance.

Those seeds of my early gaming days are just the beginning and contributed to the type of gamer, and person, that I am now. I’m still that person that questions how and why things work. I love knowing about the intricate details of a machine. It’s also applied to my relationships with friends and loved ones. I want to know more about people, listen to their stories, and figure out who they are. Some might see that intrusive, but I don’t berate people with questions. I sit and listen. Not many people can claim that they are good listeners. Ok well maybe they can, but how many actually are? I’m one of those people.

FF4 also allowed me to be aware of my reality. Not everything is going to work out like a fairy tale. I walk through life knowing that bad things will happen no matter how many good deeds I try to accomplish, and that’s ok. We all find a way through it eventually. It makes me practical and pragmatic. It also makes me more sensitive to people’s problems.

Most of all, FF4 taught me that it’s ok to be myself. I’ve spent so much of my youth questioning if I belonged. I was never like the other little girls and hated myself for it. But when I thought back to Final Fantasy and the obstacles that stood in Rydia’s way because she was so different from everyone around her (the last of her kind!), my problems didn’t seem so bad. I was able to like myself for being different because of Final Fantasy 4. And isn’t that the best lesson of them all?
Email Post
Labels: critical distance monthly blog topic ff4 final fantasy IV mortal kombat origin: what makes the gamer