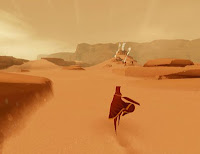 Grammy nominations are out today. This year has been a nice surprise for my music tastes. I’m open to all genres, except country and rap, but I have an affinity towards alternative. And this year is looking to give lots of love to The Black Keys, Gotye, and Fun.

But gamers have something to be proud of too. We have a full soundtrack in the running. Journey from thatgamecompany was nominated for Best Soundtrack for Visual Media. This is the first video game to ever be nominated for a soundtrack, and a good choice! It’ll be up against the likes of John William’s for Tin-Tin, Hans Zimmer for The Dark Knight Rises.

This isn’t the first video game to be nominated at the Grammy’s, but it is for the full soundtrack. Civilization 4 won a Best Instrumental with Vocals in 2011 for one song. This is a nice leap forward for video games to be appreciated as an artistic medium. Music is a crowning achievement in video games; something many of us look forward to when we open that package. And if anything has been more influential or memorable in music, it’s been video games. Right up there with Star Wars and Rocky.
Email Post
Labels: best soundtrack for visual media journey thatgamecompany video game nomination for grammy