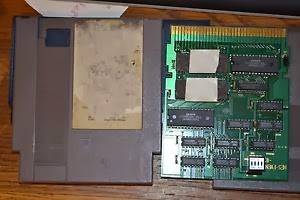 Game collectors, a copy of Nintendo World Championships is up on eBay for the next day and 9 hours (at the time of this posting).

The original sticker is torn off and replaced with a ballpoint writing of the word Mario, but the seller has claimed that this is the real deal, one of the grey cartridges. The insignia near the top left was only marked on this particular game, so it is, indeed a rarity. And those who have checked the serial numbers on the opened game can verify it. Of course, it's still $5,000+ and in a used condition, game only, no box, but it could still fetch a nice price-or a nice gem to someone's collection.

The Gold version is more valuable, but finding just A copy of the game is a challenge of it's own. Only 90 were made, with 26 additional ones encased in Gold. The last grey one sold in 2011 for nearly $11,000. I don't expect this one to reach past the $6 grand mark because of it's condition (so yes Orlando Sentinel, the quality of the exterior DOES matter in value), but it's a worthy purchase to a collector.
Email Post
Labels: ebay nintendo world championship rare game sale