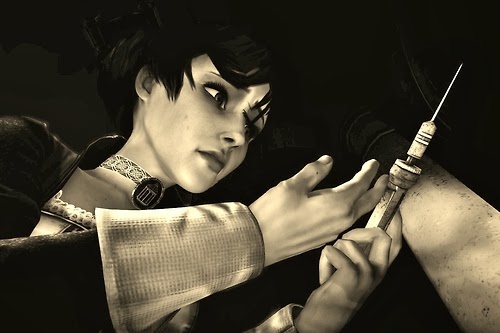 As video games have permeated more and more into the classroom setting, a social studies teacher in Hershey Pennsylvania is integrating games to become the class textbook. Jeff Mummert uses video games as a means of critical thinking, to get students more involved in the subject matter, and to review games much like they would a painting. Even though the worlds and the people are mostly imaginary, the concept is sound. If there's one thing I have been concerned about for years when it comes to education, is that schools are too focused on drilling facts for tests and not expanding student's mind by allowing them to ask questions.

So, yes. I approve of this method of teaching.

One assignment Mummert provided asked students to critique World of Warcraft after watching a YouTube trailer for the game, asking them to analyze stereotypes, inherit racism between the different classes, and the like. Questions that one doesn't think about when it comes to WoW, but they are important in understanding the world, the game play, and the social sciences. And of course, the obvious games: Elder Scrolls Skyrim and Assassin's Creed, which take on historical contexts within their game worlds.

Now of course, this wouldn't be an "entertaining" article without bringing up video game violence. Mummert wanted to use the latest Bioshock in his classrooms because of the dystopian setting it evoked, but ended up turning it down because of the "horrifically violent" nature of the game. They don't really delve into much more after that, but given how sensitive the U.S. is to exposing kids to violence in schools (and not really giving two craps when it comes to movies and television), it is a concern that isn't taken lightly. I remember even in high school having to have a parent sign a permission form so that we could watch The Lion King. Yeah. A Disney G rated movie required a permission slip. Not to watch the movie, but to ensure that it was okay for me to watch a G rated movie. You can forget about anything above a G. It's not happening. So while I understand that some games with their M rating would not be feasible in a classroom here in the states, it would still be possible to splice up cut-scenes and showcase the social studies content (which Bioshock is chock full of) that doesn't include "extreme" violence.

Mummert also dives into modification of a game to help introduce historical context, and provide more diversity in gender and race. They don't actually/physically go in and alter games, it's all theoretical and done on paper. Still, it's critical thinking. Any form of it is a massive thumbs up in my book.
Email Post
Labels: skyrim social studies with bioshock video games and education video games in the classroom world of warcraft wow