Calling It Now. South Park is the Unexpected Hit Announcement of E3 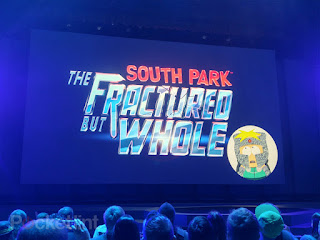 It's only Tuesday and so much has been announced at E3 that we'll be overloaded before the show floor opens. Today Nintendo will make their big presentation, but Microsoft and Sony were not shy about coming out of the gate strong, making bold claims and even bigger game drops. I don't mean remakes, or long awaited spin-offs. The game of E3 is clearly South Park: The Fractured But Whole, the unexpected sequel from Ubisoft and SP creators Trey Parker and Matt Stone, who were very adamant about not wanting to make a video game ever again.

"The big thing is, we're kind of whiny babies," Parker commented during the Ubisoft stage show last night. In the midst of developing The Stick of Truth they learned a lot about the process and came up with a great template for their product. Most of their concern probably had to do with their publisher, THQ, going bankrupt as the game was nearing completion. The rights were bought out by Ubisoft and handed over to their subdivision, Obsidian. It took a while, but it was released in 2014 to both critical acclaim and fan respect. It also won a few game awards across the board, so not all bad, right?

The Fractured But Whole continues the story of your New Kid. Another new evil is rising in the city of South Park and you must become the hero that the city needs.

If you caught the reference, the SP gang will be transforming themselves back into their Super Hero identities, along with Professor Chaos and new heroes to join the cause. I wonder if Cthulhu will reappear... This is more of an origin story, as Stone points out in the Ubisoft presentation, much like any comic book. We find out more about the New Kid's history, how he got his special fart powers (get it...But Whole?), and determine his purpose in the game.

The game is already up for pre-order on Amazon with a release sometime in 2016 (maybe the holiday?).

I'm surprised that the team is willing to take on the challenge again, given how adamant they were after the last game. But it would also explain the changes in their show release schedule. And if But Whole is half as entertaining as Stick of Truth, it's worth the purchase.
Email Post
Labels: cthulhu e3 e3 2015 game of e3 South Park south park the fractured but whole ubisoft