Demo an E3 Nintendo Game This Week (without going to the show!) 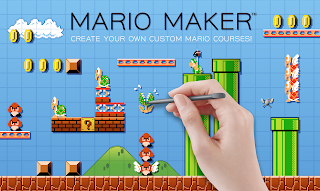 Need to fill your E3 Nintendo meter? Well they did something extra cool this year for their conference. Knowing that their audience is mostly at home, they created a digital presentation. No big stage. No press members. It's a 100% fun-filled crafted experience.

The puppets were a nice touch.

But, what I wanted to bring up is the Nintendo Access. Starting tomorrow and again on Saturday, you can test out Mario Maker at select Best Buy stores around the country. You can demo the same game that is on the show floor at E3! It's all in celebration of 30 years of Mario. Nintendo is really striving for maximum audience reach this year, and putting their product out there to the public before release is a smart move. There's a store in my area, so I hope to try it out tomorrow after work. I may come in an hour early so I can get in line sooner. I'm sure there will be a line.

Mario Marker allows you to build your own Mario levels on the Wii-U. It gives you all of the parts that you need from every platformer Mario game, from Super Mario Bros. to the tag team Wii game. And there are new features! Some of them explained in the Nintendo panel, but you can stick Mario on a cloud and have him shoot fireballs, if that's what your level is designed to do. There are no limits to your imagination.

And like all new things Nintendo, there is an 8-Bit Amiibo. You can use him to change your Mario in the game, and he'll grow to oversized proportions, along with the enemies. There is also a new feature called Costume Mario. If you add other Amiibos to the mix, Mario will change to that new figure. Need to bend under a low bridge? Swap to the WiiFit Amiibo. Running up walls? Samus can help with that. Not the jumping part though. Better leave that to Mario.

And if you demo it, you get a nifty pin. My inner PAX nerd is jumping for joy about that. Check out the Best Buy link for store locations.
Email Post
Labels: amiibo best buy e3 nintendo 2015 mario maker mario marker demo at best buy nintendo