How The Witcher 3 is Prompting Responses for Not Being Sexist 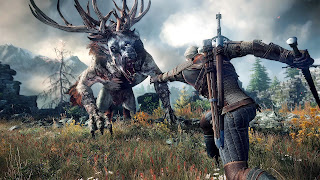 Forbes is really getting into gaming lately. Their recent op-ed regarding The Witcher 3 and responses from Anita Sarkeesian is causing a bit of a scuffle.

It's important to note that Erik Kain is providing an opinion. There are few facts that really support the discussion, other then a couple of tweets that were pulled from Sarkeesian and Jonathan McIntosh, the producer and co-writer for the Feminist Frequency series. Kain has given Witcher 3 a great review. "One of the best open world games," he says. So already he has a vested interest in providing positive feedback to something that he likes. (And I don't mean for that to come off that he's biased. Everyone has some sort of bias built into them. I'm doing this to set up the stage before you dive into the article.)

Kain does get points for trying to defend his opinion because, based on the information he was provided, he feels that Sarkeesian and McIntosh are lambasting a product that haven't yet experienced. Their tweets are coming off as empty or lacking true knowledge of the game world. He does take it a step too far and claims that their responses are a part of a political agenda (because everyone has one of those?), but the presentation of his point of view is well thought-out.

I am, however, going to disagree about the need for "fantasy" stories to use real-world scenarios in order to resolve issues and/or make the game more valid. Oh! She got called the c-word! That makes this gritty and hard-core!

Much like the recent backlash against Game of Thrones for the events surrounding Sansa Stark, it seems rather silly to try and make things in a fantasy setting to be a real-world equivalent. Not when you're trying to have us believe the dragons, giants, and fairies are also "real." Fantasy can be gritty. I'm not saying that it shouldn't be. But to use objectification of another being as a plot device is over-used and, frankly, lame. Who's to say that we can't have a fantasy world where such actions are punishable by death? Where there is no threat to women, children, or people of different skin colors, religious beliefs, and sexual preferences?

If you want me to believe in a world where dragons exist, then people not being assaulted for their gender should be an equally plausible plot-line.

The issue I foresee with Kain's article is that people are going to pick at it because he's a white male. White male privilege. It's a buzz word as of late because they experience the world differently from others, and there are studies to back it up. As a white man, there are benefits that others do not get to experience. They are almost always at the top of the corporate ladder. They rarely see time in a jail cell, and they experience little to no racism or sexism. They have a different view of the world compared to, well, everyone else. I can easily see Kain's article turning into a "well he doesn't know-he's a man" bickering match, particular towards the closing points. I ask that you take a step back and try to see the piece from Kain's point of view. He sees two well known figures in gaming criticism ganging up against a product that he enjoyed, and believes that they haven't experienced it in full to provide a proper response. He felt the need to defend the game.

Take it as you will.

Also a shout-out to Greg Toppo. A recent interview with him appeared this morning on Atlanta's NPR station regarding his latest book 'The Game Believes in You.' He was kind enough to forward me a copy of his book, and in-between podcast prep for an upcoming convention, I have been diving into it. A full review will be available soon.
Email Post
Labels: anita sarkeesian forbes game of thrones jonathan mcintosh sansa stark sexism in gaming the witcher 3 violence in gaming women in video games