Keep Gone with the Wind for Film History 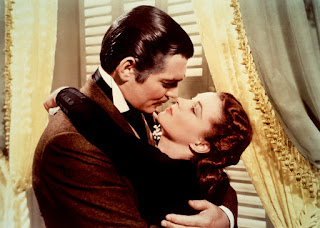 My post today is not about video games. There's your warning. But it is geeky and movie related, if that helps change your mind! Stay. Keep reading.

In the wake of multiple retailers, large and small, removing all merchandise with the Confederate flag, more groups are attempting to push for other products to be taken away as well. Understandably, the Confederate flag, used as a symbol for the Confederate States of America during the U.S. Civil War, is seen by many to have racists implications. It was posted at a time where many in the Confederate States fought to maintain their rights to own people as property. Most of them were African (and before anyone gets on their high horse, I know that other races and even white Europeans were slaves as well). Today a number of people still see it as such, and find it offensive. It's been a debate with state governments for decades. South Carolina recently removed their flag from their capital hill. Proponents say that the flag not only represents history, but a freedom of expression: not in the right to own people. And this is the U.S. We have a lot of freedoms and liberties that some countries will never see. Taking down the flag could be viewed as a form of restricting freedom.

Whatever side of the debate you're on that's your call. This post is not about the flag debate.

This post is about the movie Gone with the Wind (GWTW). The book turned film is a Hollywood classic. It's in the national film society, honored by the Library of Congress, and in more archives then I can count. It won 8 Academy Awards in 1939 and it's studied across the globe by film historians and students for it's technical achievements, and elevating the medium to how we know film today.

Someone at the NY Post wants to get rid of it. " 'Gone with the Wind' should go the way of the Confederate flag," Lou Lumenick's headline reads. I couldn't help but laugh when I read this on my Facebook feed. Really? You want to dismantle the history of a film icon? Okay. Go ahead Mr. Lumenick. Try it. Let's see what happens.

I realize that the NY Post is not the most "newsworthy" but I couldn't help myself. I had to read the article.

The film scholar in me thinks this is hilarious. While a number of people have heard the film, and possibly seen it, what most don't realize is that GWTW revolutionized how movies were made. I've brought it up before whenever someone decides there should be a 'Citizen Kane of video games.' Movies before GWTW were static. Stories were simple. Dialogue was dummed down. Music and sound were an afterthought. Before GWTW, movies were still viewed as a passing fad. People were more concerned about making a quick buck and moving on to the next project, so productions were fast, cheap, and easy.

When GWTW came out, it completely transformed how audiences and businesses looked at movies. It provided validity and longevity to the entertainment medium, and help spur development of television and, some could argue, video games. Watch a movie before GWTW and watch a movie after it was released, and you'll realize how special that film is to the history of the medium. Long, sweeping camera pans - fully orchestrated music - action sequences that really dove into the fighting (close ups and cut-aways) versus long, static shots - Technicolor (with a matte overlay; still a new thing in Hollywood at that time, kids). These are just a few of the aspects that make GWTW stand out among it's peers.

For the story you could argue the racist undertones, but its not as conniving or underhanded as Lumenick implies. The story takes place during the Civil War in Georgia. There are issues and implications of slavery and racism as part of the books adaptation. I'm not saying that I agree with the concept, but it was, unfortunately, part of history. The book and the movie wanted to capture those aspects to maintain some form of accuracy. I realize that a number of people see GWTW as a fantasy for rich, white individuals with the sweeping camera movement, and dress made of fine drapes that was too unreal to have been whipped together. And I also realize that the movie doesn't portray other races accurately. Some characters are stereotyped and the book has a gloss-over of "North bad, South good." I'm not saying that this is acceptable behavior; certainly not for today's audience.

But it happened. This was the mindset for a lot of people throughout the Civil War and through a good chunk of history for the last century. I don't agree with it, but there it is. You can't shy away from the confrontation. You have to read it, research it, understand it, in order to develop your opinions. And this was the way people thought for decades. To them it seemed normal. It doesn't make it right, but we shouldn't dismiss history because of the thoughts of others. A lot of people were good, but misguided in their stereotypes. It doesn't mean that every white person was a slave owner (more then half of the country was proof of this during the Civil War)...what I'm getting at is we shouldn't throw aside history. Things happen. We learn from them. We grow into better people because of it. When we disregard the past, we are doomed to repeat events.

Let's get real for a moment: GWTW holds a fraction of racism by comparison to Stagecoach, a John Wayne classic.

If we were to go through and remove every racist movie, tv show, play/theater production, song, painting, sculpture - well we wouldn't have history then would we? What influences art is our past. Sometimes it's not great. A lot history is pretty crappy. But through a creative medium we are able to express our longing for a better future, and help influence others to read, research, and learn. When we remove movies like GWTW from our history, we're not allowing ourselves the opportunity to grow. "What has changed since GWTW? How are we improving as a nation? What can we learn from this film that will encourage us to be better people?"

See. Life lessons that can be learned from a movie through discussion.

Let's be adults here. I'm not defending GWTW in terms of it's story. But even things that we don't like, or we may feel are crap (Call of Duty), do have value in our society if we take the time to talk about them.

I rambled. If you're too lazy or didn't read: don't ban GWTW. Talk about it. It's an important part of film history and help developed many of the tools that we still use today in Hollywood. Sticking it in a museum or a library and pretending it "didn't happen" doesn't resolve the issues the movie brings the light. Being proactive and discussing them, not starting arguments, fights, and wars, but talking as civilized human beings - that's where the film can help.
Email Post
Labels: banning gone with the wind citizen kane gone with the wind the new york post the ny post