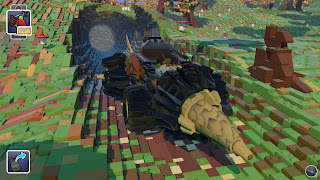 In case you missed it, yesterday LEGO released their game, LEGO Worlds, on Steam yesterday. Though the game is technically not finished are there are plenty of glitches to fix, the overall response to it has been positive. If you buy it today, you are in "Early Access" mode, with the full game anticipating release in 2016. Their reasoning being that there will be a lot of people playing on a lot of servers - what better time to test the load then to do it before the game releases?

Some critics are looking to LEGO Worlds as a Minecraft killer. I would call it a rival, but that's being logical. Something drastic would have to come along to wipe Minecraft off the Earth. The game plays on a very similar premises, where you have your own world and you can build it however you like, out of LEGO bricks. All squares and rectangles! There are even Skeletons. You can play with past and current LEGO sets (unsure if Star Wars or Lord of the Rings is in the mix, but that would be nifty), and it has mod support. It is on Steam after all. It's essentially LEGO online since you can interact with other people, invite friends onto your World, and so-on.

Reading the reviews, everyone is echoing the same sentiment: It's Minecraft with LEGO's. But that's how the crafting of mine came about.

What will make LEGO a stand-out is how it manages to separate itself from it's building counterpart. The restrictions are, most likely, where you can put the blocks (they only fit in the slots) and your imagination.

Early Access is going on now, and at a reduced price then what you would pay when the game goes live next year. Get on it!
Email Post
Labels: LEGO LEGO Worlds minecraft steam