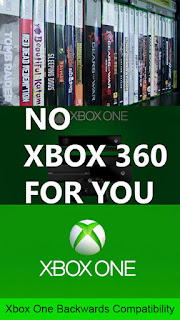 I realize that a lot of you are freaking out about Microsoft's announcements at E3. Hold your horses there tiger and let's take a step back to analyze what has been presented to us.

- Phil Spencer, XBox Bossman, is giving the XBox One backwards compatibility...for limited 360 games. Here's the list as it stands, with 100 games to be available by this holiday season, and more potentially in the future. Supposedly all digital downloads on the 360 will have the ability to be transferred and playable on the One. We'll see how that turns out. You'll also be able to download games that you own from your discs, if it's on the list. So no. Not everything will be backwards compatible. Why even bother? All or nothing Microsoft and Sony, that's what I'm saying.

Also...Mass Effect on the XBox One? Without a major overhaul on the graphics and game play, that must be terrible to watch. It wasn't that great for a 360 game, and I'm a fan. Just saying.

- Hologram Minecraft. Sorcery! But it's true! Team Mojang went out on the stage and showed off the Microsoft HoloLens, a new headset that augments reality and allows users to take any flat surface and load up a game. Crafting of mines seemed to be an ideal test subject with it's blocky, LEGO-esque features. The demo allowed the user to zoom in and out on their world, enter buildings, and the like. There will also be voice command features through the headset so you can rain down destruction on your plot of land. No news about price points or availability, but it will be available for testing at MineCon 2015 in London.

- Old is new as Rare celebrates their 30th anniversary with a bundle collection of games that would make any 35 year old salivate. From fuggin' BattleToads to Perfect Dark, this August for $29.99 you can own 30 of Rare's best and brightest games. No gimmicks. No shortchanging. All of the games, in full, for you to own. Now that IS pretty darn cool. Funny enough, some of those games are on the XBox One backwards compat list. Feel free to smirk like I did.

- Game Preview. This new feature for XBox One users. It's essentially Steam testing for XBox. A select few games still in development will be available for users to buy and help test. You get these games at a discounted price and you may, or may not have to purchase them in full later. That part was conveniently left out of the presentation. You also get access to game trials before purchasing. No details on that either. I'm going to assume it's select titles as well.