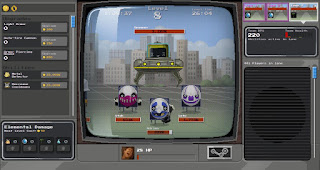 The Steam Summer sale is on! While Steam does have their cycle of sales, this is their biggest one all year. Two weeks of deals that constantly change and grow based on the community. It also includes newer releases and even games that are still in beta testing, at sales prices. Personally, I dropped about $35 and picked up over 20 games. Not a bad haul if you ask me.

But that's not what I want to talk about. I could go over all of today's deals but you guys are gamers. You can take the 5 seconds to click on the link and scroll through the options. What I wanted to talk about the sale being a game in itself.

This year Steam is offering even more discounts to their customers, but you, and the rest of the user-base, have to participate in the event in order to unlock them. It's the Monster Summer Game. From now until June 20th you can play a flash game, via internet or through the Steam client directly, A retro-inspired 16-bit explosion of sound and color. Monster Summer Game is a click-based action/strategy mash-up. Mobs appear on the screen and you have to spam your left mouse button to destroy them. You collect money as you go, which can earn you power-ups from auto-fire cannons, to gaining more money from bosses. Users are not alone on their path. You will join a game with 200 other people as you spam your clicker finger to get more gold. And the game continues even if you're not playing. It'll be active in the background to continue blowing up bad guys, and collecting gold, while you let your hand rest. All that clicking can be tedious.

Steam has also made it very easy for people to join their friends. You can start a new game or jump into an existing one with people on your friend's list.

So why play the game? As the community achieves certain milestones, Steam will unlock additional games for their summer sale. So far the games have been mostly indies, and a few random titles thrown in that most of us already have, such as Dead Space. If the current gamers get the 15 million click goal within the next 3 hours, the last deal will open up for today. Users also have the chance to unlock trading cards and craft the Summer badge.

The game itself is not the most technically challenging. The design is fairly straight-forward and it is safe for those over the age of 6 to play. There is no blood, no cursing, and no sex. You are clicking robots to death. Some people have reported issues with the game via the internet, so your best bet is to play through the Steam client directly. But overall it's fun, simple, and it unlocks more deals.

It's very meta of Steam.

Now! Let's get to clicking before I have to head into work. I want to see that last game unlocked!
Email Post
Labels: meta steam steam game steam summer sale summer monster game