Playing at the Movies 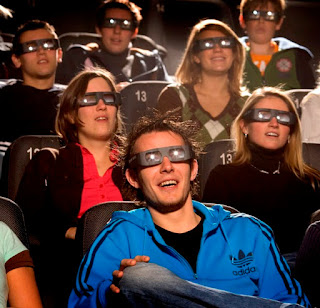 As movie theaters look for alternate ways to drum up business (the chain I frequent now sells t-shirts and collectible pins), more are seeking out video games to bring in the younger crowd. We saw it at E3 this year where Sony held their press conference not only at the convention center, but through theaters around the country, providing swag to those who attended. Cinemark has been showing League of Legends tournaments from time to time over the past year. Aside: Did you know you can have a corporate event at movie theaters? I've been to 2 over the past 5 months. It's strange, cramped, and the food is questionable.

A theater in LA, iPic, took it a step further and hosted a game night for Minecraft aficionados. A local group, Super League Gaming, approached the theater with a suggestion to start up a tournament to be held during the week. $20 at the door and the theater and the league would split the profits.

What most people don't realize is that theaters tend to hold a low occupancy from Monday-Thursday midday. Most attendance and sales come from the weekend, when the bulk of people are out of work and school. Which is exactly why I love to go to the movies in the middle of the week. No one is there. O_O Some theaters will average about 16% occupancy over the course of a week. It's a lot of opportunity for those empty chairs to be filled. Thus theaters are looking outside of their frame to get corporate events and gaming tournaments to step in.

And why not? Take the experience of gaming and put it on the big screen. Get the full effect of the surround sound (which oh my goodness is so glorious with certain games), or work with the entire theater to play a few hours of Pokémon. Cinemark Plays Pokémon. That's a seller.

Logistics and technical issues are the biggest set-back one would have with gaming at the movies. As ticket sales for movies have dropped over the past decade, fewer theaters are renovating in order to off-set the loss. I can only name 5 of the 40 theaters within my area that have HDMI capabilities, digital projectors and screens, dining (because if you're going to be at a theater for more then 6 hours you need to have something other then popcorn in your body), and seats with tray tables (for food and your laptop). Planning needs to take place and you can't expect an event to crop up overnight. But, if you know a few hundred people who might be interested in a mini-game tournament, hit up your local movie theater. You might be surprised at how much they're willing to accommodate you for a cut of the profits.
Email Post
Labels: minecraft movie theaters generating new revenue movies playing games at the movies pokemon video games and movies video games at the movies