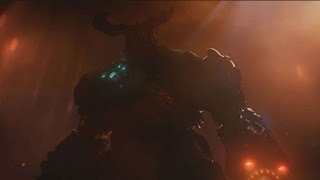 I had a long commute to work this morning. A really long one. People in Texas are afraid of two things, and two things only: water and white stuff falling from the sky. The latter is typically ice or snow. Neither are welcomed. What usually rounds up to a 40 minute drive took nearly 2 hours. Thank you Tropical Storm, now Depression, Bill for proving how stupid Texas drivers are on the roads.

As such, I needed something to make me smile this morning. I may be stuck here, or at a hotel overnight if roads are flooded (which is, indeed a real concern. Lakes in the area are at the highest levels they've been in, in decades. I personally have to drive over 2 lake bridges just to reach my home, and both were at an inch of water when I passed them this morning). The Mario Maker demo at my local Best Buy may be cancelled today due to the weather as the parking lot begins to flood there. Humor is necessary at this time.

To my delight I found this delectably awful piece of trash from The Federalist. The title is enough to make you roll your eyes, bust out laughing, prepare yourself to close the article, and yet you'll want to read more.

'Why The Left Hates Video Games'

That link is safe to click, without giving the website any hits or improving their search engine ranking. DoNotLink is an awesome resource.

But really, this article...of all the things how the hell did they come up with this premise? The "left," considered Democratic and liberal, hates video games? Did we fall into a wormhole and end up in another dimension where Republicans and the staunch conservatives of our country now approve of games? Where the entire history of legal and federal cases against video games, all brought up by those who affiliate themselves as Republican or were elected into office under the Republican banner, didn't happen?

His argument centers around Doom. Yeah. That Doom. The reboot is on the show floor at E3 this week, and he jumped on the Tweets of two very Left thinking individuals: Anita Sarkeesian and Jonathan McIntosh. Two people who have never spoken about their political views and have no affiliation to the government. McIntosh is the producer of Sarkeesian's Feminist Frequency videos. Yeah. They're so Left they can't see straight. (Hint: That was sarcasm.)

Holt never mentions anyone else on the "Left" side for his debate. He focuses on two people who play and critique video games. Because being a gamer makes you "Left," which completely disproves his argument that the "Left" hate games. Thanks for contradicting yourself.

What really toppled it over and caused me to bark out laughter was the failed attempt at bringing in the French Revolution into the mix. According to Holt, video games are an outlet to do evil deeds. One of the core foundations of the "Left" point of view during the French Revolution was to perfect humanity through force and persuasion. While the "Right" is trying to protect everyone from the Left religious agenda (Left and Religion...those words mix?). Note: Holt uses the words of George F. Will, a Pulitzer Prize winning reporter of the Washington Post, completely out of context, and from an interview on The Colbert Report - a SATIRE Republican news show - regarding the "Right" protecting people.

So! Doom is actually good because it allows people to do evil things, and the "Left" religion is trying to cleanse you of these bad behaviors. The "Right" just wants to save you from the thoughts of the "Left."

Okay. I can't type anymore. I'm laughing too hard. The content is pure crap and it's too funny.

If you happen to make it through to the end (Yea for DoNotLink!), most of the comments are equally as amusing, poking fun at Holt's abysmal reporting.

I'll have a review of the Console E3 panels later today.

Ending this with the standard warning: I'm not a politician. I don't associate with any political party. I'm apparently too in the middle to have an affiliation. I wrote this piece not to make light of any politics. I wrote this because Holt wrote garbage and it needed to be shared for a good laugh.
Email Post
Labels: a really funny interpretation on stupidity democrat doom e3 left republican right why the left hates video games