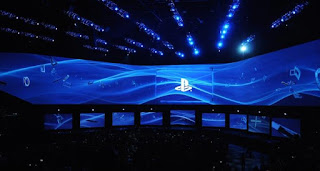 Sony Conference review time. We've taken a look at Microsoft and Nintendo. What did Sony try to do this year to set itself a part?

And I don't mean sequels and prequels that litter the landscape. There will always be a Call of Duty, expansion packs for Titanfall, AssCreed, Uncharted, you name it. Some things will always be the same. But this time Sony reached form a new place. New properties. New titles.

New. Content. From developers we all know to those at the starting gate. I was surprisingly impressed at what Sony had to offer that I can see why the SquareEnix panel was lacking, both in new footage and in attendance.

Sony spent a good chunk of their time talking about all of the cool things coming to the PS4 that are original games. While they opened up the show with The Last Guardian, a lot of their focus centered around independent products and developers trying out new things. Media Molecule, the brand behind Little Big Planet showed off dreams. A game that allows you to paint with your motion controller and build your own worlds. Using basic puppetry skills, you can create your own short, animate film, a game level, or create your own music. dreams is fascinating to watch in determining how it was developed. No wonder MM has been quiet for the past few years. It looks like a technical achievement that I couldn't begin to explain.

Another is No Man's Sky. There was a quick trailer of it last year, but this time they had content to show off. You are an explorer in this giant galaxy. Your goal is to get to the center of the universe, just like everyone else. Along the way you can jump into multiple star systems and explore plants at will. The coolest part of the demo was the presenter saying that every dot of light is a solar system, and you can visit every one of them. And then he expands his map out to show thousands, upon thousands, upon thousands of stars. It looked like an image of distant star systems from the Hubble Telescope. It was insane. And the knowledge that you can explore as you see fit is really damn cool.

And then there's Firewatch which looked like Team Fortress but for the PS4. You're a park ranger and all communications has been cut off in the area. You have to use your instincts, and the voice of your companion ranger on a walkie-talkie, to make it out alive and solve a mystery. The humor dark, but in a way that wasn't too creepy. The open world exploration felt real, in-spite of the cartoon nature of the animation. It seems like you can utilize the world to build tools.

Horizon: Zero Dawn looks like Skyrim on acid. It is beautiful. You are a nomad living in a post-modern Earth. Something happened to the world where nature took over, as well as robots. Your goal is to survive and to keep your clan alive another day. And probably to figure out what happened to cause the robot overlords to rule - they didn't clarify that in the preview. Something to mention, this game has a female lead. And you know what? It didn't seem trite or out of place. It felt natural. Game Devs. Listen up. Make your female leads like this. She had strength, courage, wisdom, skill, but you could feel the raw emotion emanating from the character. She's not beefed up to be "Ms. Man" and replicate a male character, but she's also not dummed down as a helpless victim due to her gender. She feels real.

Not so new content: CoD exclusives, AssCreed (I really hate to say it, but I think Ubisoft gave a female lead option and emphasized it during the presentation to respond to the naysayers. My thoughts - it's not difficult to animate woman, don't you think Ubi? :) ), and a Hitman upgrade. The rest of the event was okay. It's stuff we've seen before and knew would happen.

But I think the vast amount of time spent on all of the new properties really helped Sony stand out from the crowd this year. It may not be backwards compatibility, but I'll take new games any day.