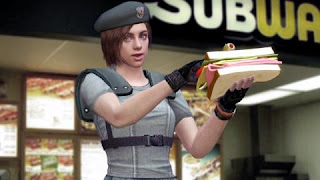 I was hoping to save this for Friday, but with so many gaming stories today, it's difficult to resist. Here is a round-up of the best, and worse, that the internet has to offer this week:

- GoLocalPDX, an online magazine for Portland, Oregon, wants you to stop pre-ordering video games because there is no point to it. Right on! The writer hits on many of the points we've discussed before. That pre-orders are now a marketing tool to get people to buy into a product before it's finished, and in many cases games are released with bugs and glitches that you essentially paid for a broken game. But then there's the DLC, which can always be added on later, and you drop $10-$20 for content that should have been in the game to begin with. Or how about that Collector's Edition? Spend $50 for a book stand and maybe a game manual. Ohh! (I seriously can not remember the last time I had a manual come with a brand new game. How sad. I love manuals.)

- ESPN is really taking it to the next level with their coverage of video games. Their recent issue of ESPN Magazine features Seahawks player Marshawn Lynch on the cover, as a video game character. He is the villain in the latest Call of Duty: Black Ops, announcing his involvement with the franchise on Twitter. The magazine itself is a full-on eSports issue. Yep. It's all about gaming. The issue covers the recent Dorm Wars competition as well as the national League of Legends tourney currently underway.

- Elon Musk, the man behind Tesla, made a game when he was a kid. And now, you can play it! Not bad for a 12 year old. It's a space game akin to Asteroid. If anything, it's a good way to kill 10 minutes of your free time.

- WhatCulture looks at 10 video game franchises that were infamous, industry defining no less, but now seem to be forgotten. I'd say take the list with a grain of salt, like most of WhatCulture. Their #10 was Quake. A game that is still played today and even has one of the largest gaming conventions in the South, QuakeCon. They also list Left4Dead. While a third game hasn't been announced, the original and squeal are still one of the most heavily played games on Steam according to recent stats. So, take it as you will.

- The Angry Video Game Nerd now has his own 3DS game. Initially a Steam download, it was just released on the Nintendo eShop for the handheld system. And it's just like it's counterpart. If you've played the original, then you know what to expect. But now! you can go mobile with it. Oooh.

- The Escapist has an interested article on the standard "Mary Sue" character in video games. The piece in particular focuses on Witcher 3, and if the game loses it's charm because the character seems too "all powerful." The writer is protecting their character from all evils by beefing up their skills. Riddick is a fantastic example of this. The character becomes dull, lifeless even because they can do no wrong. If you read one article today, this should be it.