XBox One Will Get First Taste of VR 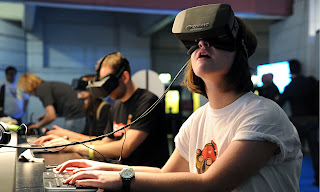 Facebook and Oculus unveiled their first VR headset for consumer consumption yesterday afternoon, and it'll be available for the XBox One in early 2016.

The first headset is heavily centered around gamers and developers (no duh). Oculus has partnered up with Insomniac Games (Ratchet & Clank, Resistance) to produce content specifically for the headset and a VR experience. This first wave of technology will run exclusively for the XBox One and Windows 10. Sorry Sony and Nintendo fans. You'll have to wait a while.

A bundle pack with the Rift and an XBox One system was announced as well, but no details on pricing, or what games may be included. A special controller is part of the package, but that's about as much as we know. The Rift is a headset and goggle piece. Pretty simple by comparison to past VR experiences. Specs on the Oculus Rift and it's image quality are still unknown. Though the tester version has been shopped around at gaming conventions for years, and if it's anything like that, it'll be good.

They also announced the Oculus Touch, two handheld controllers that look kind of like the Wii Nunchuck that you can utilize instead of the XBox One controller, so you feel more involved in the action on the screen.

As exciting as this is, I want specs and pricing. I'd love to get into the VR experience with Oculus, but how much are we going to have to dump into this? Oculus was purchased at over $2 billion from Facebook, and needed millions from investors to start up. It's not a cheap product to build. Gamers will spend money if it's worth it, but we have our pricing limits. When the PS4 first released at nearly $100 cheaper then the XBox One, where do you think we went? We know a deal when we see one, and we'll use it. Especially when games are $59.99 - $89.99 a piece.
Email Post
Labels: Facebook facebook buys oculus microsoft oculus Oculus Rift oculus rift exclusive to xbox one windows 10 xbox one