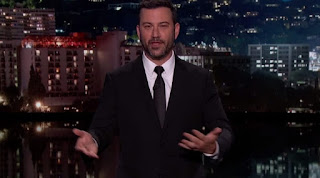 Comedians making fun of people is nothing new. It's part of their job description. So when Jimmy Kimmel and his team released a YouTube video poking at gamers and the streaming services new YouTube Gaming Channel, to say people were upset is putting it mildly. The backlash was large enough that Kimmel needed to respond. Which led to more humor and mockery, and more pissed off people.

To be fair, there were a lot of good points made by commenters on why the initial video, and now the response, was not appropriate. Mostly because it paints gamers in a light that is not accurate, and that our hobby, our passions, and for some our jobs, are nothing more then a fleet of fancy. The other argument is that watching people play games is no different then watching your favorite sports team. Why is one considered perfectly fine, but the other is anti-social and weird? Kimmel's response ended with "in the meantime go outside and play" followed with "or watch a video of somebody going outside to play." Like...sports...that people watch...on tv's, and their phones, and online...all the time. Which Kimmel does every weekend.

It's a circle jerk.

But of course this is entertainment. So most of the valid comments were not shown on Kimmel's late night show. Instead it focused mostly on the bad comments, or the ones with terrible grammar, or idle threats of stupid actions. I think we can all agree that they were not the best selections and they all make gamers look bad. Because these comments are not our voices. They are the extreme minorities. But you know. Entertainment. Whatever it takes to pull in one more viewer.

To give Kimmel credibility, he also admitted that he doesn't understand video games. Doesn't get their appeal or why people would be interested in watching other people play. "Maybe it's my age," he says. The likes of Twitch have risen over the years due to the increase amount of watch time by the younger people. I can safely say that very few people within my 30 age range don't watch Let's Play videos. The demographics skew much younger. Minecraft's under 10 year old fan base is proof of this, as it's one of the most streamed topics on YouTube. If you're not on the gamer forums or actively involved in the community, you wouldn't know about the appeal of streaming games.

And I feel that a big reason why so many gamers lashed out against Kimmel is because they are fans of his show. Kimmel and Conan O'Brien are the top late night show hosts for young adults and the 25-35 crowd (though that will change once Steven Colbert makes his appearance, me thinks). The other late night comedians don't do it for us. These two individuals in particular seem to understand the young ones much better then anyone else. So people took Kimmel's words as a personal attack on our culture. "I like you man! Why are you disrespecting my life?" That sort of thing. (Before I hear the arguments about Conan's video game segments, he doesn't attack gamers. It's a focus on how horrible he is at playing games, and watching him as he plays - the highs and the lows.)

Kimmel's response is not going to quell the commenters. But at this point, he doesn't seem interested in stirring up more controversy. The best thing that we as gamers can do is to response with well thought out points of contention. Don't scream in all caps. Don't argue. Don't swear. And certainly DO NOT THREATEN with any form of violence. I would not be surprised that every person who did this has been screen captured and forwarded over to the police by Kimmel's team. That's not something to take lightly.

But respond with points that are meaningful. Explain to Kimmel why Let's Play videos are the rage. What makes them unique and stand-out from their counterparts of YouTube fame. And why gaming is becoming a reputable sport. He may not understand it or care to understand. But it'll help give our community a positive light and less vitriol comments.
Email Post
Labels: gamer's let's be mature jimmy kimmel kimmel responds to gamer's comments youtube gaming