We Did Not Go Back In Time 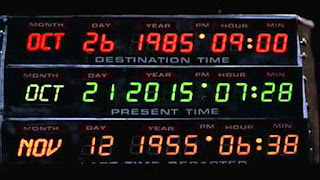 In honor of Back to the Future Day, today being the point in time that Doc Brown, Marty McFly, and Jennifer Parker travel to the future in Part 2, I've decided to revisit my first year of posting. More specifically, October of 2010. Yes dear blog readers, I've been here for over 5 years. Still talking about video games. Still conversing on geeky things. You'd think I would be tired of it all by now, but when it's a hobby and a passion, it's impossible to run out of stuff to talk about.

Time to take a skip down memory lane!

Even in 2010 I was reporting on gaming conventions such as BlizzCon where it was basically all about Diablo III and not much else. I was even writing about new gaming companies that started, such as Trion - it probably helps to note that my brother works there so anytime he's involved, I like to support him. He's my bro. That's what I do.

And does anyone remember The Jungle? I sure do. It was a very clunky looking hand-held system devised by Panasonic. It was going to focus solely on MMO's, because everyone wants to play an MMO on the go, and run off of Linux. It was enough to make gamers around the world go "wait, what?" Panasonic. A company known for quality electronics was about to make a really stupid business move. Luckily someone wised up and cancelled the project a few months later. But that could have been a thing!

In 2010, as I began my journey into blogging, I was already working on thought provoking, critical pieces. This original article by Tim Rogers is still something I think about when I look for quality writing.

Happy October 21, 2015 everyone!
Email Post
Labels: back to the future day blizzcon gaming pumpkins history of the geek spot kotaku october 21 2015 the jungle