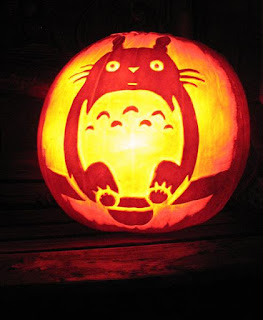 While a number of people will be out with their children to trick-or-treat, or at parties with friends this Halloween night, some of us will be at home, curled up with a good video game. Here is a weekly round-up of some of the best, and worse, Halloween video game stories around the web!

- Design & Trend has a list of 6 video games to play on Halloween night! And I don't know why a fashion web magazine is talking about video games. Just go with it. Their list isn't bad, and includes The Walking Dead, the Resident Evil remake, and Five Nights at Freddy's.

- CNET takes it a step further and gives you the 5 scariest games/moments for this holiday that are sure to make you scream. Or at least slightly startled. It's rare to get someone to scream because of a video game.

- If pumpkins are more of your thing, Forbes has put together 12 geeky pumpkins from the internet. Most of these will look familiar, such as the Death Star, but there are some new ones in there. The Captain American and Totoro look really stellar!

- Current gen video games get in on the fun of Halloween as well. Many MMO's offer events, while some have in-game items and downloads to obtain. Such as Ultra Street Fighter IV with costumes for every character. Destiny has quests, gear, loot, and Thriller-like dance emotes. If you're on Final Fantasy XIV, there's a witch's outfit, a flying broom mount, and house décor to obtain. And of course World of Warcraft with witches brews, rare mounts, rare equipment, and pumpkin heads. Lots of pumpkin heads.

- Paste Magazine came up with a list of the 10 scariest haunted houses in video games. I'm still trying to work out how 5 Nights is a haunted house, but in theory it fits. Even though it's a working attraction for families.

- Fusion came up with an interesting list of the scariest video games, based on a heart monitor result. They played a few games with two people and compared the results. The games included 5 Nights, Amnesia, and PT. The charts are posted so you can get a better idea of what 30 minutes of game play looks like with the heart monitor. That's one way to approach how to measure fear.

- If you're looking for something historical and not gaming related, The Atlantic has an interesting overview on the history of zombies. Where the term originated from, what their initial meaning was, and all of that. Kind of cool to see how the past utilized the word and how much it's changed now.