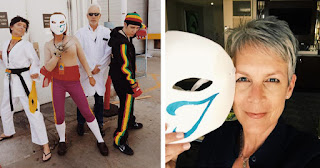 Jamie Lee Curtis is an awesome person. Not because she's a respected actress who likes to have fun with her rolls, but she's also an outspoken feminist and a gamer. She's been spotted at BlizzCon and other gaming events, roaming the halls in costume so she can be another fan like the rest of us. She's currently involved in an IndieGoGo campaign for Twin Galaxies, auctioning off meet and greets and some of her retro movie swag.

Twin Galaxies is, essentially, the go to source for all video game records. They have been keeping up with the books since the early 80's but the platform is in dire need of a major overhaul to the site, and is looking to branch out to social media (creating their own version for gamers), a mobile app, admittance to eSports competitions, and such. Curtis became interested in video games after getting involved in her son's gaming habits. It started with Street Fighter and has evolved to World of Warcraft and League of Legends.

When she's not attending game conventions, she's campaigning for video games and eSports to be more mainstream. She loves the work of indie directors (one of her favorite movies is Dogtown, about the rise of the skateboard scene) and how the rise of gaming is the next evolution in entertainment. She's been to live League matches and was floored to see tens of thousands of people up and cheering for 10 people on a stage. Video games have a lot to offer, and she is proof that age doesn't matter. It's the fun of gaming, which is one of the reasons why she is involved with the IndieGoGo campaign. She met the current owner, Jace Hall, through a friend. She loved the work Twin Galaxies was doing in promoting gaming record keeping and ensuring fair, fun play, and wanted to help out. Simple as that.