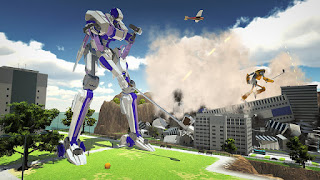 The Weekly Link Round-Up is early. I found a lot of bad stories on the internet today. So bad that I'm going to be using Do Not Link a lot with this posting so as not to give more hits to these terrible pieces of writing.

Let's see what's on the menu for this week's gaming news:

- Fox News San Antonio is solidifying the Fox News reputation of failing at Reporting 101. Their story on "how do you know if video game content is appropriate for children?" misses the point entirely and relies on one man's opinion for a response. A man who developed a parenting website to try and get families away from technology, and with an App on iTunes that has one of the lowest ratings I have seen.

Both links are using Do Not Link, so you won't be helping improve their search engine rank. But if you don't want to read the story, all you need to know is that by the second sentence, all credibility is loss. It was already iffy in the first sentence. It starts out mentioning that kids are going to be getting video games and media players (really? kids still want those?) under the tree this year, and game developers set the ratings on their content. Here's the wonderful second sentence: "There's no industry standard on what's appropriate for kids."

Um...what? Have you been living under a rock? No industry standard? Then explain to every gamer and parent out there what the ESRB is. Last checked they've been doing a bang up job at helping the gaming industry self-regulate. They are the ones who provide ratings to the games, not the developers. They are the ones who mark what content is in each game. Not developers. And the system has been solid since 1994. Of all entertainment mediums, it's consistently ranked as the highest in ease of use, ease of understanding, and turns away 3-5 times more kids from 17+ content then movie theaters and music stores.

This is bad reporting at it's finest. Way to live up to your Fox News namesake, Fox San Antonio.

- Vogue says that fashion has a love affair with video games. Oh really? Now this has to be interesting! But if you click on the link, you'll find yourself disappointed after 2 measly paragraphs. The article mentions fashion mogul Karl Lagerfeld and the fact that he's been in 2 video games: GTA4 and the recent Kim Kardashian: Hollywood, a mobile game. Damnit. More click-bait! The article is laughable and downright depressing. Vogue...you can and have done better then this. What's the deal? Or was there a deal with Kardasian's "people" to do a mini ad for her new game? Hmmm...

- Master Herald looks at GTA6 and spews a lot of uncorroborated facts about the future title. Really, it's just someone making a lot of wild fan theories and trying to pass it off as a story. Both funny and sad to read.

- WhatCulture has a list of the 12 worst games of 2015. Okay this one I'll link to because WhatCulture makes me giggle with their bad lists. For once they're on point with their selections. I'm still iffy about The Order: 1886. While it lacked replay value and the game mechanics could have been tightened up, the story line was compelling. But the rest of the list, totally agree.

- Psychonauts 2 has hit $2 million in donations since being announced last week on The Game Awards. Double Fine Productions has asked for $3.3 million in crowd funding, but will be getting outside investors to help with some of the costs. There's been some...concern regarding this crowd funding experience. Double Fine doesn't have the best track record. Their last attempt in early 2012 resulted in a fully funded project, and people are still waiting on their backer rewards. Proceed with caution.

- Want to teach your kids about the history of video games? Send them to KidzWorld where they can learn about Ralph Baer and how he became the father of video games. If you're under the age of 10, this is probably pretty cool. I prefer the Smithsonian version, but that's just me.

The event is being organized by a professor and a researcher in gaming and 3D aesthetics by the University UCO Laval in France. The point is to recognize the games that touch us on multiple emotional levels, and give credit to the writers and actors that bring these digital creations to life. It's meant to show other entertainment mediums that yes, video games can tug at the heart strings too. Prizes and winners will be selected by Ubisoft (big shock there), Rockstar Games, and Frima Studios.

- And finally a look at one of the silliest games from the recent PlayStation Experience event: 100 FT Robot Golf. The name of the game is exactly that. It's 100 foot tall robots playing golf, on the level of absurdity as Goat Simulator. Enjoy.
Email Post
Labels: 100ft robot golf do not link emotional games esrb fox news playstation experience psychonauts 2 ubisoft vogue weekly link round up weekly link roundup whatculture