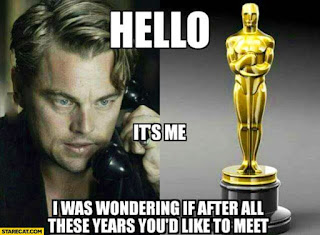 Warning: here's one of those non-gaming posts I sometimes concoct from time to time. Feel free to browse the archive for some past favorites, or go to Google and play the doodle image today. It's adorable. We'll be back to our regularly scheduled program tomorrow. Or hey, check out Kotaku, which has a breakdown of the new combat system in Minecraft that will really change the way you play.

Let's talk about the Academy Awards!

I once was a film student (though you never really stop learning with film so you're always a student in some form or another) with 3 degrees under my belt. The Oscars are my one "must watch" show each year. And I make an effort to watch as many of the nominated films as I can. Which is difficult as I live in a city that doesn't have many "art house" or independent films on their roster. Even the "indie" locations still rotate in 'Deadpool' to get ticket sales up. But I still do my best and I think there was only 2 movies this year that I missed out on. Thank you Netflix for having such an open library to include international movies as well.

Why do I watch? I look to the Oscars as the pinnacle of peer review for the medium. It's what others among the community feel is the best of the best, and a myriad of factors are taken into consideration when the final nominee list is released. Were there some hits and misses? Sure. Just like with any award show, some people should have been nominated that weren't. Will Smith for 'Concussion.' Not a good movie, but he acted his butt off. He did get noticed by the Hollywood Foreign Press for the Golden Globes, so there is that. I think the hype over 'Straight Outta Compton' was too much. I don't believe any one person in that film really acted on the level as the individuals nominated this year. But they did have a fantastic script. One of the more well-written movies I have seen in a while.

We can argue about appropriation and the lack of diversity in the nominees (the focus has been on Black actors and actresses, but let's not forget the foreign film categories, shorts, documentaries, which show a diverse nature - and the director for 'The Revenant' Alejandro González Iñárritu is Mexican). Yes there should be more diversity, but we shouldn't have to have POC in the awards to appease the masses (as in, we shouldn't intentionally put in POC into nominee lists for the sake of "we have to have a Black guy" - re-examining how one gets nominated is a must, along with changes in the industry). Yes Hollywood needs to stop being the white man's playground and allow for more POC, women, and the like onto the screen and behind the camera. Yes the whitewashing of characters is out of hand and needs to end. Know how you can resolve that? Stop spending money on movies that you don't want to see. Your wallet speaks volumes. Don't like that a movie about Hispanic immigrants are being acted by white people? Don't go! You'd be amazed at how much the industry can change simply by you keeping your wallet closed.

I also think that a number of people are taking the issue of "asking women more questions" beyond "who are you wearing?" are not understanding what the point is. Even Chris Rock poked fun at it last night and it was off-key. The problem is not that people are asking us "who are you wearing" when it comes to a fancy outfit. It's that it's the ONLY THING they ask us about. Men can get a myriad of questions about their craft, why they chose a script, their acting ability, the works. Women it's all about clothing and if they are dating someone. As if those are the only aspects of our lives worth talking about. This Funny or Die bit with Kristen Steward and Jesse Eisenberg is a fantastic example of what women experience while being interviewed - just in general! I get this crap a lot when I'm meeting new people or being interviewed at work for press events. It sucks. We're not saying that we can't talk about our dresses, but there is more to us then the dress. If you can ask the men more diverse questions, you can do the same for us.

If you haven't figured it out by now, the Oscars was all about the #OscarsSoWhite hashtag roaming the internet since the nominees were announced. Chris Rock's opening monologue was well-versed, it hit the heart of the matter, but it wasn't so off-putting that people would ignore it. The problems rose when the theme became pervasive all night long. It took the form of Stacey Dash, and it was awful, uncomfortable, and in a "did not need to go there" vibe that I'm surprised Chris Rock went through with it. Short story: Dash, who may look familiar thanks to 'Clueless,' supports equality, but feels that we need to stop separating each other for this to occur. So no more Black History Month, BET, things like that. She's not very well liked by a number of people because of her bold stance. The laughs you heard were uncomfortable and strained.

The only lighthearted moment was when Chris Rock had the Girl Scouts of Los Angeles come out to sell cookies to the audience. Because like any parent, he wants his girls to beat out the other den mother who gets the award for most cookies sold every year. Apparently Batman likes Thin Mints, which is awesome. They are officially the best cookie ever. Batman endorsed it.

The rest of the show was dull and borderline too much with pushing the diversity issue. The problem with a number of these affairs is that people with money get preachy on the general population to make changes to the industry. But as the general public, we're not rich. Our only influence is where we choose to spend our $20 on movie tickets, and with the limited choices we rather choose something to keep us entertained for 2 hours then nothing at all. Changes have to happen IN Hollywood by those who are in charge. There's only so much we can do as the movie-going public. We can close our wallets, but that's not going to solve the problem.

Feel free to agree or disagree with me. My opinion may not be the most popular because hey, I'm a white woman. What the hell would I know about diversity issues, other then the fact that most of the people in the movie industry who are not "actors" are white men. Good luck finding a woman behind the screen that are not shucked away into make-up and wardrobe. You should have seen me cheering when 'Mad Max: Fury Road' won Best Editing. Their lead editor was Margaret Sixel. A woman. While she is married to the director, she has a vast history of editing work under her belt long before she married George Miller. And she pieced together the story of Max in a way no one else could. Lead editing gigs are once in a blue moon for women, so this was a huge step forward - not to mention damn. The 'Mad Max' crew was super diverse!

All of this to say, while I know that there was emphasis on POC actors and crew to address #OscarsSoWhite, it's not just the general public that can help make a change with our wallets. The majority of the work has to come from the people up top who make the decisions.

The winners themselves, some were expected and some were not. I was actually a bit surprised that 'Mad Max' won as many awards as it did, beating out favorites such as 'Star Wars: Episode VII' and 'The Revenant' in visuals and sounds. Why? Because this was a big action movie that the general audience loved. It's incredibly rare for 1, action movies, and 2, blockbusters, to win Oscars. The panel has a hard-on for the unknown, simple films that are well acted. Even the costume design went to Max and not to 'The Danish Girl' or any of the other 1900's period pieces. It was not what I had imagined, and that is what makes it so awesome. People in Hollywood are seeing the value of great action movies that break the barriers on what we know.

I was also happy to see 'Ex-Machina' win on visual effects. I know this was a point of contention with a lot of people. Why not 'Star Wars'? Well with Ex-Machina the effects revolve around the human body. They had to make the human actresses look like they had android parts and seem real. I don't know if you all have done this, but making effects on a human is hella difficult - more so then any laser blast or explosion. Trying to animate on a human is a painstaking process. And it's so easy for it to look cheesy if you're off by a nanometer. The fact that the android parts on the actresses look too real to be true means they did it right. I never once questioned how they made it happen when I watched the film: which is damn impressive because I'm always sitting and wondering about effects of that nature. I was able to lose myself into the movie and not question a thing. So 'Star Wars' nerds, you can back off a bit on this one. If it helps, your precious Poe and Hux are in the movie too.

Overall, it was just an okay show. Nothing to write home about. The performance of the night certainly goes to Lady Gaga and her riveting song to survivors of sexual abuse, along with a message on changing the conversation about assault, from our Vice President Joe Biden - who is apparently friends with Gaga. Who knew? Sadly, the performance lost its luster thanks to the editor in the control room and bad stage-hand who couldn't keep the "white frame" steady as a camera moved in to Gaga on stage. He also made himself known by showing his face and hands in the camera before going wide-eyed and ducking out of the way. The camera angles were a nightmare and too fast, cutting from an overhead wide shot, to an uncomfortable close-up, and then back to a low angle near the piano - it was a mess. They should have kept it simple and maintained a 2 shot-camera system: one wide to show the stage, and a medium on Gaga. They needed elegance, not flashy.

Speaking of elegance, the In Memoriam section was beautiful. Thank you Dave Ghrol for accepting that difficult task of playing the music to accompany the slideshow. It fit perfectly. He was brilliantly poetic and classy. 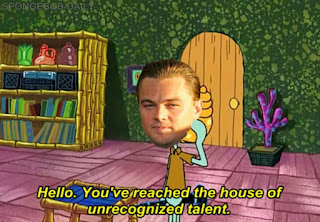 Will I watch again next year? Of course. This is my thing. But the show needs to be re-examined on where and when its a proper platform to preach to the general public, when we can barely afford our mortgages. And you want us to talk about climate change? Yeah, okay. We'll get right on that.

Oh, and Leonard DiCaprio got his Oscar. Like we all knew he would. The internet is going to be inundated with meme's for weeks. Even leading up to the award, Twitter was full of photos with him in a tight shot of his face, with that serious look he gives and the words 'SOON' underneath. Enjoy your social media feeds!
Email Post
Labels: 88th academy awards academy awards 2016 chris rock gaming news another day kotaku leonard dicaprio oscar