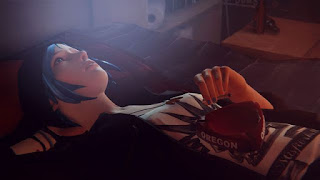 Developer Dontnod is teaming up with Legendary Digital Studios and dj2 to create a miniseries to air online for the video game Life is Strange. As announced on their blog, the developers believe that the game lends itself well to television, and the digital series will be available for web consumption. There are very few details regarding the collaboration beyond that. There's no casting announcements or release dates. But it's happening.

I'm probably in the minority of this opinion, but I'm not in favor of this move. Life is Strange is a humbling awkward game. You can alter your decisions as you play by rewinding time. Not to the level of Prince of Persia where you can change an entire level; this is just a few seconds or fractions of a second. In doing so, you learn so much about the main character and the importance of one's decisions. Every action has consequences, so to speak. It's a powerful life lesson squished into a unique game.

An important aspect of this game is the player's ability to make a decision. When that's removed from the medium, the message no longer carries the same weight. What became a powerful tool for Life is Strange is now a passing fancy. You can argue that the game is visually played out like a film or TV show with it's episodic format, which does lend itself to those mediums and making the transition easier. The lack of player choice may prove to work against the miniseries. Games like this that require the player to interact heavily with the content don't always transition well to the big screen - particularly when choices are involved. That's part of the enjoyment of the game.

Or it could work wonderfully well. I don't know. We have to wait and see what happens.
Email Post
Labels: actions in video games choice dontnod legendary digital studios life is strange life is strange TV show miniseries square enix