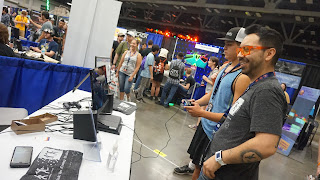 Gaming expos are an an odd cataclysm in the realm of conventions. People go to network and do business. And they go to relax, have fun, and try out new games. And to hang out with friends. And to boost their fanbase on Twitch and YouTube by playing tournaments. And to spend money on swag and Five Night's at Freddy's plushies. It's a weird place to be.

Unlike anime conventions, with a focus on a fun, friendly environment where people can geek out on all things Japan while spending money, and pen shows, which is a real thing and it's 100% business related, gaming expos are a little bit of everything and anything. More then a party atmosphere, and full of serious gamers.

What makes them so enticing?

Gaming expos are multi-faceted. It allows everyone, no matter what type of a gamer you are, to enjoy themselves. Want to play the latest tech demos before anyone else? Head to PAX Prime/West or GenCon (for you tabletop fans). Interested in meeting your favorite YouTube and Twitch stars? RTX, PAX, SGC, and a bevy of other gaming expos now feature them as guests! Indie gamer? You're covered there. More indie games are appearing at expos, big and small, to get their name out there. Or if you want to just sit in a room and game all weekend with your PC, you can do that too.

It's not an experience you'll find anywhere else. And even if you are a casual gamer, you'll find yourself among your peers and brethren talking about the hobby you enjoy so much. Also easy access to developers. Many of the core team members will attend these conventions to test our their games, and it gives you an extraordinary opportunity to talk to them. My favorite thing to do is to try and break their games when I play because it's the most helpful feedback to the team, as odd as that may sound.

I don't think of gaming expos as a "party place." There are after-parties, sure. But the feeling on the show floor is more like being involved in an exclusive club with thousands of others that you can call friends. It could also be that my expectations of a party include alcohol, dancing, and lots of smoke in the air - the dancing thing might happen at a gaming expo if there's a DDR game in the room.