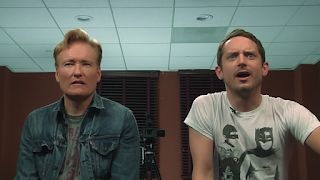 Clueless Gamer, a segment on The Conan O'Brien Show, has taken off in recent years as a top place for large game companies to market their product. Coco hits the target demographic that publishers are trying to reach. And his antics of not being a gamer are what make it enjoyable. You put a controller in his hand and he's going to make fun of whatever comes across the screen while trying to capture the enjoyment of the game.

So why SquareEnix signed up to put Final Fantasy XV on the show is beyond me. It's the first time I've seen a Clueless Gamer segment and Coco did not look like he was having fun. Even with Elijah Wood at his side, the two looked confused and despondent as the game progressed. Not even female Cid could rouse their attention with her busty, um, bust and short shorts.

The problem with short segments like this is that it can be difficult to get an RPG to translate well with the audience. RPG's are time sucks. That's a known fact among gamers. If you want to showcase something like Skyrim or Dragon Age you have to pair down the demo for these reviewers to highlight the"cool stuff." That means lots of battle sequences and crap flying through the air. Less talking, walking, and waiting. Unfortunately the FF15 content used for the show looked similar to the demo where it's a lot of talking, walking, and waiting. At one point the fancy car breaks down and both Coco and Wood lamented at the time it was taking to see, well, anything.

The one bit of action that 'did' happen, after Coco gave up control and went to stare at a wall (because that was more interesting), it was lackluster. An Adamantoise appeared. That got Wood slightly interested in the game again. Until nothing happened once more! He couldn't attack the beast. His goal was to suss him out as the source of earthquakes in the area (that Wood predicted would be the situation from the moment the quest was given). And that was it! Nothing else occurred. Quest ended and they were done. What? At that point Coco and Wood were informed that this monster takes 72 real world hours to defeat.

Coco admitted that this was the longest Clueless Gamer segment they have ever filmed. And it was a whole lot of nothing. Coco was not impressed. Neither was Wood. Nor some of the staff on set by the look of things. As a Final Fantasy fan, I wasn't floored by what SE opted to show off at this stage with release looming around the corner. You couldn't give the man an active battle sequence? You had to give him the long strings of endless walking and talking about a wedding dress? If I were playing this demo, I'd probably be equally as unimpressed.

In the end, Coco said that the game was an "aggressive waste of time."

Some fans on Reddit and other forums think that the review was too harsh from someone who hasn't experienced the full game, and doesn't play games in general. Fair point. We need to keep in mind that this was just a small fraction of the game and doesn't represent the whole; that probably needed to be said in the segment as well. And most people know that part of Clueless Gamer is to point out the ridiculous idiosyncrasies in games by someone who hasn't been immersed into the environment. Games do some stupid things, and sometimes they need to be called out for that.

So fans, chill. It'll be okay. At least people are talking about FF15 in a FPS heavy winter release cycle. If you are going to buy the game, I doubt that Clueless Gamer had any effect on your purchase decision. SE may not have made the best decision on what content to show, but it did get enough buzz for people to talk and post about it. I'm sure they consider that a win in their book.

Just to make the whole situation that much more awkward, reps from SE were sitting just outside of the room where Coco and Wood were gaming. They heard every word, and neither man could leave without passing them. Whoops.
Email Post
Labels: clueless gamer conan o'brien ff15 final fantasy 15 final fantasy xv squareenix the conan o'brien show