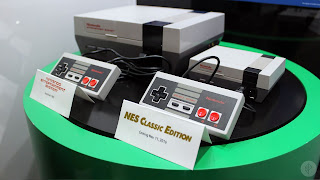 As gamers none of us are surprised that Nintendo's release of the NES Classic this holiday season, a mini-Nintendo system with 30 games to play, would be in short supply. It's part of the companies' MO to have limited supply and create a high demand for their product. And for only $59.99, compared to the hundreds a person would have to drop to get the original system and games, it's a great price. So of course people clamored over it, for the nostalgia, and stores had few available to sell.

Again, we knew this would happen. The Nintendo Wii took 2 years of being on the market before supply caught up to demand. And for 2 Winter holiday cycles people had to clamor to get a hold of the popular item. The Amiibo's? Who could forget those. The recent iteration from Nintendo moving to the toy market in 2014 send fans into a Beanie Baby frenzy to collect all of them. Many of the Amiibo's were limited editions or had a select production limit. If a store had one they were out of stock within the hour. Somehow I snagged the unicorn that is Samus, the uncommon Link, and the rare Rosalina/Luma without effort. Go fig.

Even when I was a child, I remember the fervor over the release of the Nintendo 64. My parents spent months locating the system so it would be in our hands Christmas morning.

Peeps, this is what Nintendo does. Whether it's being underhanded or smart business, they create demand over their products by producing a small supply. When people hear about Nintendo products being sold out, they want to know more and feel an urge to have it so they can be part of that "exclusive" club of Nintendo owners. The demand on the NES Classic is proof that this practice is not going to go away. It's worked for decades with Nintendo (I wouldn't be surprised if they did this back when they made playing cards and Baseball cards).

The concept also benefits Nintendo in a different way by lowering their expectations and not having to handle backlash over defective or "lame" products. The Wii-U was released with the belief that it would bring in high sales. That backfired and the system never fully reached it potential before Nintendo moved on to their next brainchild. (It probably didn't help that Nintendo never classified what the Wii-U was until years after release. Is it a peripheral? Is it a system? Is it a controller? What the heck is it?)

So dig in your heels for the long haul if you want the NES Classic, or go for a scalper price on eBay. How can this practice change? Simple. Don't buy into the hype. Keep your wallets closed and eventually manufacturers will realize that clamping down on supply isn't beneficial. It can be that simple. Consumers hold the power. I'm not saying it's the fastest route, but it is the one that will garner the strongest impact.
Email Post
Labels: gaming economics nes classic nes classic limited supply nintendo nintendo creates own demand supply and demand