No Surprise - Assassin's Creed Movie Not Favored by Critics 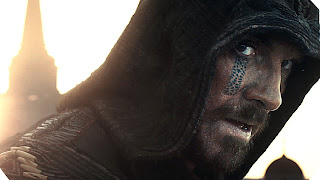 With a lowly 19% rating on Rotten Tomatoes, it's going to take a lot of effort and way more marketing for the movie to pull people into the theaters. Maybe it was the Kanye West (gay fish) song that they used in the first trailer? It could have turned people off.

But in the history of video game movies, critics blasting AssCreed should not be a surprise. They are destined to be disliked by the movie elite. Game movies are there to excit the younger audiences and rake in the cash. Maybe AssCreed will do that and not bat an eyelash at the critical response. 'Warcraft' did just that and succeed overseas.

What hurts to read is that the movie cost $150 million to make. How? In this realm where people know video game movies are a gamble, why would you spend so much? The 'Deadpool' movie is a prime example on how a studio film with a lower-budget can work. You don't have to spend $100 million for a great movie to happen. And AssCreed could have learned from this if the reviews are any indication. I haven't seen the film yet. I want to out of curiosity. The reviews for it read like all the other video game movies: lots of action and little substance. An all-star cast does not make for a great movie. The story is where it counts.
Email Post
Labels: assassin's creed movie assassin's creed movie reviews video game movies warcraft movie