The Game Awards 2016: No Better or Worse Than Last Year 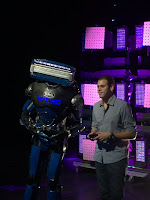 Let's talk about The Game Awards. In it's third year, #thegameawards is still trying to improve upon it's success from the previous attempts. With Geoff Knightly's promise to gamers to try and provide more game play and trailers that are rendered in game, after the folly of the No Man's Sky hype, he sort of delivered.

The Game Awards this year started with honoring Hideo Kojima. After last year's win for Metal Gear Solid 5, Konami barred Kojima from attending the event to accept the award. The hate for Konami was swift. So everyone knew that if they could make it happen, he would return for 2016 to get his award. Kojima's speech was short and sweet, and he dropped a new teaser trailer for Death Stranding. All you need to know is winking Reedus-fetus. It is trippy and glorious.

The rest of the show was fairly bland. There were moments where you felt that The Game Awards was really achieving something ideal for an award show. Such as the speech from the creator of That Dragon, Cancer, winning for 'Games for Impact.' It was heartfelt, emotional, and full of love of video games. And then they would go to a music segment from some B-rated rap group that made me think that this was the Spike TV Game Awards show all over again. The in-show advertisements were horrible. Schick Razor Hydrobot? Playing a game of himself? What? I understand having sponsors to put on the awards but did you have to have in-show advertising? There were commercial breaks. You could have put the ad spots there. Not during the show.

It was equally as bad for the 'Assassin's Creed' movie. They showed off 2 scenes, but they were so poorly edited (choppy transitions that appeared to cut out whole swaths of the sequences) it did not entice me to want to see the film. It had the opposite effect. I am HOPING that is not the edit of the final version. No one will be able to sit through it.

If you catch a recap of the 'experience', the only things worth watching are the Death Stranding and Mass Effect: Andromeda trailers, the DOOM music performance (by the band that created the music), Nolan North's acceptance speech for Best Performance, and the speech for That Dragon, Cancer. The rest of the show is too much like Spike TV that it will melt your brain cells.

The show was okay. Tolerable. At least it was only 2 hours and 15 minutes long. It could use more video game music (stop with the rap that no one cares about), and no in-show advertising. You don't see the other award shows put a Schick Razor Hydrobot on the stage to dance around.

By the way, the final "World Premiere" word count was 15. The Game Awards has thrown my drinking game into disarray! I'll have to edit it for next round.
Email Post
Labels: death stranding doom hideo kojima hydrobot konami mass effect schick razor that dragon cancer the game awards video game music