Weekly Link Round Up! 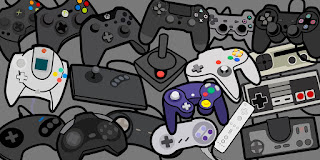 Wow...it's been a while since The Geek Spot hosted a Round Up of gaming news. My bad. It's been a rough month, to cap off a very craptacular year. But let's not waste anymore time. You are here for the best, worst, and silliest news on the internet. So let's go!

- iTech Post gets the "fail" award for the day in their article listing 'Star Wars' games that deserve a sequel! The problem is 2/3 of the titles listed already received a sequel. Knights of the Old Republic and The Force Unleashed both produced second games that were successful. So...um...what hell iTech? Did you not do your research?

- Kotaku would like to remind us that 2016 wasn't THAT bad - at least for video games. A lot of good content did come out this year to take our minds away from reality. Even games that we never expected to see, like Final Fantasy XV and The Last Guardian. Even Hitman's crazy episodic release schedule worked! That was a surprise I was not expecting and I am eager for Season 2.

- GAME, a leading video game retailer based in the UK, is looking to change the customer experience in their stores to boost sales. While the market is still more profitable then movies and television, sales have been slipping over the years as more consumers move online to digital downloads. GameStop is buying up small digital publishers and ThinkGeek to develop their own content and nerd-ware. GAME is turning some of their stores into "belong" centers (weird, I know) with gaming arenas. Hosting tournaments, parties, and gaming nights seems more like the type of stores gamers want.

- Google has released their list of the most searched terms of 2016. Pokémon Go and Slither.io were ranked 4th and 5th in overall searches across the globe as two of the most popular games of the year. For games by themselves it shouldn't be a surprise that Overwatch and Warcraft made the list.

- Random website! Segment News has a list of the top 10 video game romances. The list itself is not bad. They have a number of platonic relationships, such as Master Chief and Cortana in the Halo series. But sometimes the best character moments are about a loving bond that doesn't have to include sex (Bioware, we're looking at you).

- Twitch has announced a new segment to their streaming brand: IRL. This sounds like a weird April Fool's joke, but it's not. IRL is a new content category that is similar to a vlog, allowing users to stream whatever they want. Their thoughts, opinions, feeling, everyday life, you name it. There are content restrictions, such as no nudity or pornographic content, but it's the next step to making Twitch the ultimate streaming platform for everything. This also includes Mobile Broadcasting, which means you can now stream live from PAX if you wanted to. Guess what I'll be doing at PAX South this year?

- Last minute gift idea for the game coders in your life! Humble Bundle has a new book collection out for you to purchase, worth nearly $500 (college textbook money, woo!) for everything you ever wanted to know about coding for games. 16 books for $15 and the money will go to the National Video Game Museum, Girls Who Code, and Maker Ed.
Email Post
Labels: game game coders gamestop google humble bundle irl nintendo pokemon go star wars games think geek top 10 video game romances twitch weekly link round up