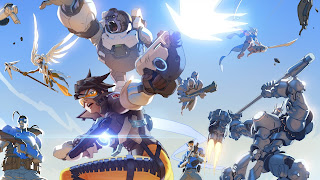 Blizzard is taking the cheating concerns for Overwatch to the next level, by suing a company called Bossland (which has created hacking software that Blizzard claims infringes on their copyright) and banning over 10,000 Korean accounts for "nuking." Bossland and Blizzard have been butting heads for years, as the company pushes out cheats for World of Warcraft and Diablo all the time. However their last bought was settled out of court and the case was dropped, so Bossland isn't too concerned about Blizzard's new threat. But Blizzard claims that the new hack from Bossland is costing the company tens of millions of dollars. One of the hacks is an overlay to the UI that includes cool-down timers of your teammates and the enemies so that you can better prepare yourself for the next attack wave.

The tricky thing is that Bossland is based in Germany, and any lawsuit brought up in the US will most likely not be applicable to German law. This is where Blizzard has lost in the past. While they can ask to have the German version of the cheat changed, they generally can't for the US. Digital laws are fun and incredibly complex. Unless Blizzard can bridge the gap to find a law that would affect their overseas sales, they may lose out on this lawsuit too.

As for the "nuking" situation, that's people being extra dumb on top of dumb thinking that they wouldn't be caught. "Nuking" is when you DDoS specific targets, say your opposing team in an Overwatch match, making the game so laggy it is virtually unplayable. You either end up quitting or losing the game within minutes without having the chance to play. Thus improving the other teams ranking/skills. Unlike the first issue of cheats, this is down right insidious and is illegal in some countries. Intentionally overloading one's network to cause them to crash - yep. Doesn't sound very legal to me. Blizzard commented briefly on why the accounts were banned, and endeavors to keep the cheating situation under control as the game surges on.

It's nice to know that Blizzard is taking cheat concerns seriously. Guess all those reports from players are being looked at after all!
Email Post
Labels: blizzard bossland ddos ddos in overwatch diablo overwatch south korea