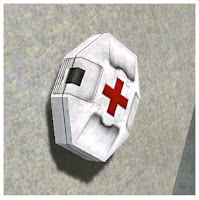 Hey kids! Did you know that you can't use the red cross symbol in a video game? It's true. Unlike a number of iconic images like Rosie the Riveter that are available to the public for use, the red cross is not. The image to denote help and a place of sanctuary is owned by the International Committee of the Red Cross (ICRC) and the symbol is protected by the Geneva Conventions.

Why are we talking about this? Well the developers behind the indie game Prison Architect (Sim City but in a prison), received a letter just before Christmas from the British Red Cross that they were breaking the law by using that symbol. At first they thought it was a joke, but realized soon after that it was a pretty big deal. But the confusing thing was that very few game developers in the past have been targeted for the same infraction.

The red cross symbol on health packs is common in every game. Doom, Halo, you name it. You can't Google Image the red cross without stumbling upon a game version. For a symbol that shouldn't be commercialized, the ICRC is doing a poor job of reminding people about it. At the very least, they are picking and choosing at random, and affecting mostly independent developers not the big guys. Even more confusing is that in Prison Architect the crosses only use up 5 pixels. They are very tiny and don't take up the same space as a Doom health pack.

Right now it's unknown what the developers will do to resolve this. They don't seem to be acquiescing to changing the red cross in the game, but they don't want to pursue legal action either. In this mess, they have brought up a very valid point that the ICRC is spending money in a way that some people may not appreciate; using it to sue game developers instead of taking those donations and helping people. It doesn't help that several offices under the Red Cross have come under fire for donation fraud and misuse of funds over the past year.

Tough nut to crack. What do you all think? Should the ICRC drop their cases and allow games to continue using the symbol (which has always represented health, help, and safety - the same things the ICRC's symbol stands for) or do they have a fair claim on copyright? Thus they would have to go after all game developers - not just the indie crowd.
Email Post
Labels: copyright law icrc prison architect red cross steam the red cross using the red cross in video games