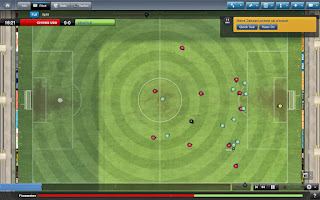 If anyone ever makes a statement that video games are not as challenging as they use to be, show them this article about Football Manager. Streamer VikingDan spent over 100 hours taking a tiny, non-club football (soccer) league and transforming it into a Premier League and Champions. 100 hours for a simulator game that's based on real world data. The game is so accurate that a number of professional teams utilize it to come up with strategies and trades that would benefit their roster. It's also proof that some of us crazy gamers do like challenges. There's a market for difficult games.

For us 90's kids, we know Football Manager as Championship Manager, with the creepiest person on the box art. It was one of the most complicated simulation games on the market and there was no way to really "win" in the end. It's all based on hypotheticals to build an ideal team, and even then the probabilities may not be in your favor. Think of it like 'Moneyball' but with less Brad Pitt.

But if anyone has come close to winning the game, VikingDan did. Not mention, he streamed a game that's not visually striking. Earlier versions of the game you were lucky to have top-down views of matches with green and red dots representing players. What makes this game challenging is that an AI is constantly running in the background, regardless of the players decisions. It's a robust tool based on numbers, which is always difficult to overcome. And even if the numbers are in your favor, if you don't account for a stat on the opposing team, you could lose a match. It requires a lot of attention to detail. So 100 hours to take a no-name team to top of the league is pretty damn impressive. That's easily years, if not a decade, or work in the real world.
Email Post
Labels: championship manager football manager hard video games what is a difficult video game