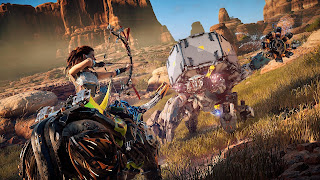 Bum rush Horizon: Zero Dawn review, because let's be honest, as of tomorrow evening I will be lost to NieR:Automata. Two weeks later it'll be Mass Effect: Andromeda. When you have a full time job, and run a part-time craft business, it's a challenge to finish a game within a timely fashion. NieR is going to consume me, just like the first game did. Mass Effect will also...unless it's like ME1 then we're going to have some problems, Bioware. But I think I have played enough of Horizon to give a fare assessment of the game. You can easily lose yourself and draw out the experience to 60 plus hours, or plow through the main story and be done in 10-20 hours (depending on how much or how little you want to explore). So here's a mini-review of the open world, PS4 darling, Horizon: Zero Dawn. 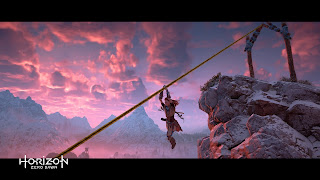 First things first: Mother of Fuggin' Pearl this is a GORGEOUS game. Weird face animations aside, Horizon is a beautiful world. Stunning. Stellar. Over the top. Wow. If 'Princess Mononoke' and 'Labyrinth' had a weird game offspring, it would be Horizon. And then artist Yoshitaka Amano (concept artist for Final Fantasy) threw a bunch of his magical colors and swirls on it. Tada!

To make it all the sweeter, the game packs a robust photography mode that you activate through the main menu. Pause the game, scroll down to Photo, and you'll be treated to an array of lenses, filters, and lighting options to customize the final image. There's even an option to change the f-Stop. It's pretty hard core for photos. You also have the ability to move the camera around. Dolly, Pan, Tilt, Shift - the full array of options are ideal for anyone who's into game photography. There are some limitations to when you can use the feature. Cut scenes or object interactions will allow you to take a screen shot but you can't adjust the camera or the coloring. Rappelling off a cliff/building counts as object interaction so you can't take action shots. But beating up a dinosaur bot or a bad guy? You can capture that! 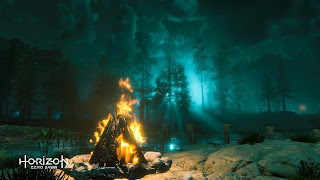 You play through the game as Aloy (Eh-Loy). On more then one occasion I wanted to pronounce it as Alloy, the metal compound. I'm sure that was intentional on the developer's part, based on the outcome of the story. Aloy is an outcast from birth, not having been claimed by her mother. She's thrust into the care of another outcast, and grows up wanting to find out why she was abandoned by her tribe. To do this she enters 'The Proving,' a yearly event where the teens and young adults of the tribe enter a tournament to become Braves, the tribes' army. Outcasts are allowed to participate as well. Whoever wins first place is granted a boon of their choice, whatever it may be. Of course everything goes horribly wrong, the tribe is ambushed, and bad stuff happens. Aloy is promoted to Seeker, under the belief by two of the tribe's councilwomen that she is a blessing. So Aloy sets off into the world with a ton of questions, very few answers, and you get to help her figure them out along the way.

Horizon is a give and take game when it comes to it's plot. It gives you lots of bread crumbs to follow the trail to learn more about Aloy and what the heck happened to Earth to create this post-apocalyptic landscape. There are no clear answers from the get-go. You explore the world and unearth questions at the same time as Aloy. Which is refreshing; instead of playing the character who knows everything but doesn't tell you squat, you are in the same position as Aloy. Full of questions with no one to directly answer them. By utilizing your scan tool, you learn more about the history of the planet through various way points. You'll see images, hear audio recordings, and tap into the past. 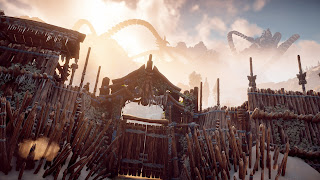 What struck my interest in this game is that humanity didn't de-evolve with the rise of the robots. Sure, we had to scale ourselves back to the Stone Age and learn how to hunt again. But humans in this game don't speak in grunts like the cavemen of Farcry: Primal. We retained our speech patterns. We maintained a knowledge of our collective past to know enough that machines are bad, and we shouldn't make the same mistake by embracing technology again with full abandon. One could argue that we evolved culturally in Horizon, as many of current societal norms (such as gender inequality/sexism, ageism, and racism) are noticeably absent in the game. Many of the villages and clans you come across will have women or people of various ethnic backgrounds holding powerful positions. One of the first main quests when Aloy leaves her home involves you seeking out and assisting the captain of the clan's army, a black woman (one of the few left alive after an ambush; tough as nails and looks ready to kill you on contact). And there's no questioning if these women and people of color can do their jobs. They prove themselves capable and they do their tasks. How refreshing is that to have in a game?

The world is made up of natural and mechanical aspects. You can hunt fish, boars, and rabbits for materials, as well as an array of dinosaur robots that litter the landscape. Some are harmless and easy to avoid. They don't become agitated unless you are too close. The Strider is a horse-like machine that can scare without much provocation. It's instinct is to run away, rather then fight you. And there are other machines that act like carnivores and feast on their own kind. Though it all, there are luscious forests, mountains, and desert valleys that will cause your jaw to drop. Somehow nature and machines have found a way to co-exist, and humans are the annoying ones carving out paths and harvesting for materials. 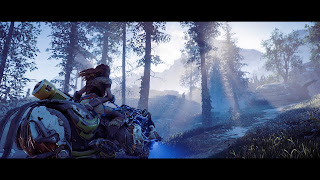 Horizon plays as an open-world, survival, action game with RPG elements. If you expect to progress in the game, you have to fight against the robots. To do this requires you to utilize your weapons and crafting arrows for your bow. You gain materials by harvesting, killing wildlife, and bringing down the dinosaur bots. The metal shards of said dinosaurs are also part of the in-game currency system to spend with merchants. So it's a continually growing cycle of harvest, stab, craft, sell. As you level up, you can unlock more abilities that will make your time out in the wild much more manageable, such as better stealth techniques. Weapons and armor also afford you the chance to add runes and upgrade them with special stats.

There are a number of fetch quests, as one would expect. Go here. Kill the thing. Grab the item. Return it. Rinse. Repeat. I don't think that will ever go away with open-world games. For Horizon, you sadly need to do a lot of these quests to get the most XP gain. When you reach level 8, the XP gain/need ratio expands dramatically and it's a bear to farm animals and robots. Quests become your saving grace in getting you the levels you need before you move on to the next plot point.

The big draw to this game will be story and exploration. If those two things do not interest you, then pass on Horizon. You have to be really into exploring in order to obtain vital aspects of the story. Sure you could focus on just the main quests, but you will miss out on the other 40 hours of content that helps explain the plight of humanity. It's equally as important for you to find all of the way points and data markers, as it is to follow the primary story. And that requires a lot of running, jumping, galloping, and hiding. That's the bottom line. 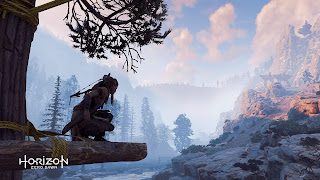 Problems that should be addressed, and I hope to whatever deity is listening that Guerilla Games considered patching this one aspect: The control scheme is set in stone. You can not adjust it. You can not swap button placements. You're stuck with it. While most of the buttons feel in line with other games, using Square for Crouch and R3 for your scanning device is dumb. I'm so use to other games where R3 is crouch, that I found myself multiple times tapping it on accident when I'm trying to hide from enemies. And instead I turn on my scanner and find myself in combat a moment later without any advantages. To get out of the scanner you either have to hit R3 again or jump. If I could swap those buttons, I would be happy. But nope! These are the controls that I have and I get to deal with it. In a month when I pick up this game again I'm going to forget this, and get Aloy killed by a robot. I hope a patch is released that gives us the freedom to customize the buttons.

I'm also unhappy with the facial animations. They feel stilted and lack emotional impact - which can be annoying because you can feel the tension in the actor's voices. But the characters do not represent this with their faces. It's almost as though their faces are too perfect, that you miss out on the subtle nuances of expressions. This isn't Mass Effect where an awkward glance can be forgiven because of limited technology. When the robot dinosaurs do a better job of expressing themselves than the humans, you've got a problem.

Fetch quests. I get it that it's an open-world game, but we're all kind of done with it. I enjoy exploring the landscape, but enough with the fetch quests. Give me another way to level up that doesn't require running from point A to B multiple times.

Overall, I am thoroughly impressed with this game, the dynamics, and the action. It's living up to the expectations Guerilla Games promised us, and I had a difficult time putting it down. This is a must have for PS4 owners. Unless you hate exploring. Then don't get this. Get NieR: Automata tomorrow and prepare to be wrecked.

Note: I'm aware of the essay from a Native American photographer about the use of language in the game. In particular the words braves, tribal, primitive, and savage. I'm not going to tell a person how to feel about it. What you think is up to you, and if you're offended by the game's use of those words, then that's your opinion. I personally don't take issue with them, particularly since they come up so rarely and are not used in the same, negative context (historically). In this age of the internet where everyone can be connected to everything, it's impossible to please everyone. Someone is going to be offended by something. Hell, some are offended by me, a woman, having a blog about video games. It's impossible to avoid any form of controversy.