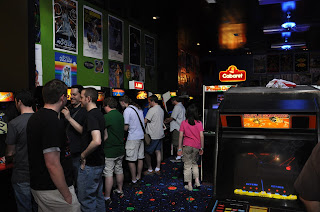 Yea! It's Friday! Which means the end of the week, and hopefully a nice, long, relaxing weekend for everyone who is fortunate enough to not work Saturday's and Sunday's. It also means we haven't have a Weekly Link Round Up at The Geek Spot. So let's fix that. Here are some of the best, worst, and weirdest gaming stories on the internet:

- Kickstarter has officially helped fund 10,000 games. Wow. A day after the company began in 2009, the first game went up 'Crossword Puzzles.' Since then the platform has become home to a number of projects and board game award winners. It's helped transform a landscape for indie developers to find a foothold among the sea of big names. It's been a good run, so far.

- I am going to let the title of this article speak for itself. "Why Women Want to Have Sex with Garrus." Important reporting at it's finest, courtesy of Kotaku. Easily my favorite article of the week. Not only because of the subject matter, but the interviews in the article and the comments accompanying it are genius.

- Not to be outdone, The Completionist played Mass Effect for the first time and offered his opinions on why the franchise is so popular. His video also has a funny title: The Mako is the Reason Aliens Don't Respect Humanity. No truer words have been spoken.

- Forbes apparently has a cartoon of the day. Who knew? Well in this case, it's kind of dumb. It centers on the number 1 reason why developers remake, and ruin, your favorite games. If the first answer that popped into your head was "money" you are correct. But the cartoon doesn't really get that message across. It seems more like a sinister plot to destroy all the fun in the world by taking good games and making them bad, not a ploy to make more moolah (which we all know is the real reason). It's just...weird. And awkwardly drawn. The message gets lost in the simplistic art style. Forbes, go home. You're drunk.

- Games Cause Fascism. That's the newest meme taking over the internet, and it's ridiculous for all of the silly reasons you can imagine. Apparently as gamers we are all about 10 steps away from believing that the Holocaust didn't really happen. Why? Because some people in political power right now believe in Gamergate and support the actual, crazy fake news sources like BreitBart. This meme will only live for a few weeks, but sure. Gamers are the reason behind Fascism. That's funny.

- Did you know that video game vinyls are a thing? I didn't either, which is why I'm happy to share this silly article about one person's discovery of game music on vinyl, and subsequent hate for the medium. Vinyl is an analog medium in a digital world. It doesn't offer any improved sound quality and is susceptible to the elements. Vinyl can degrade over time. But one unique benefit that you can't get with digitial is the killer cover art and on the vinyl. It's...stunning! Check out some of the cool artwork in the article.

- And some more good news! The National Video Game Arcade, which has always teetered on the edge of going under, is finally seeing a profit. Opening in March of 2015, the arcade has been home to the museum of all things arcade. It gives a glimpse of a history of the 80's past-time that has slowly started to make a resurgence. A number of leading game figures and businesses, such as SEGA Europe and Supermassive Games, came together last year to help the fledgling museum, showing just how important it is for us to retain our history. Hopefully the uptick in donations will continue.

- Finally, the National Videogame Museum in Texas will be hosting it's 1 year anniversary this weekend. April 1st and 2nd are free admission days. They will also be holding giveaways for gaming goodies, including a Nintendo Switch. So if you're in the region, stop on in and check it out. They have added a few new things after I attended last year. It's worth a look for a free ticket.
Email Post
Labels: forbes game museum kotaku mass effect memes national video game arcade national videogame museum video game vinyls weekly link round up why companies ruin your favorite games