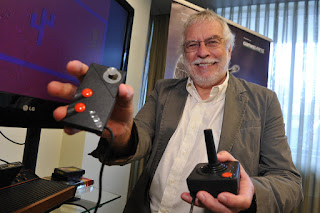 The Games Developer Conference is taking a step forward in showing solidarity among game developers, and helping promote a safer work environment for all, by rescinding it's offer to give the 'Pioneer Award' to Nolan Bushnell.

Bushnell co-founded Atari in 1972 and the company became the epicenter of the gaming industry throughout the late 70's and 80's. The company is attempting to make a comeback with a new console set to hit the market. Yesterday, GDC made the announcement that it was give the award, and within hours #MeToo stories were circulating Twitter regarding Bushnell's past. The hashtag #notnolan appeared to help spread the word.

His behavior at Atari has been well known. Antics were documented in books like 'The Ultimate History of Video Games.' Bushnell held meetings in hot tubs and would try to convince women to join in. He would comment on women's figures, even calling one out in Playboy magazine - Darlene (also the code-name for Pong). Quoted from the San Fransisco Chronicle “I find the aura of power and money is very intimidating to an awful number of girls.”

The GDC quickly responded stating that their voting board was not aware of his behavior, as well documented as it was, and their committee met to address the situation. In a statement released yesterday, they have decided to not present the award this year. Instead it was be dedicated to "honor the pioneering and unheard of voices of the past." They want the award to represent the values of today's gaming industry (which is still questionable).

For those who have spoken up against the award recipient, it is important to note that most are not dismissing Bushnell's influence on video games. He did a lot to put games on the map. We wouldn't be here today if it weren't for people like Bushnell at the helm. It doesn't excuse his past behavior, but we're not ignoring his contributions either. We can honor the man, but this is not the year nor the time for it.

Bushnell released a response yesterday that could be best described as "adequate." There's the standard "if my actions offended anyone" comment at the end that we're use to seeing now (and now roll our eyes at because we know it's not really heartfelt/sincere), but the content before that was nicely worded.
Email Post
Labels: #metoo game developers conference gdc gdc revoked award for nolan bushnell metoo nolan bushnell pioneer award