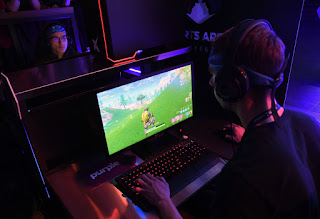 It's Friday! And you know that means it's time for another Weekly Link Round Up. Some of the best worst, and weirdest gaming news on the internet in a bite-sized chunk for you to consume. Here's what we've found:

- Do you remember a post last week about about how video game text is too small to read to the point of making the product unplayable? Some people are trying to fix that and make games for the visually impaired. And it may surprise you to find out that EA is one of the leaders. Madden NFL has been a choice go-to for those with vision issues, providing options for the color blind and nearly blind to experience the game. Check out this snippet on NPR discussing how some developers are improving games.

- Another callback to a previous post: if you want to learn more about blockchain, Animation Magazine has a great overview on what it's all about and how it can affect video games in the future. It will be quite a technical marvel for developers, providing a means to protect their assets while giving more customization for gamers.

- Because I love pointless lists, here's one from Digital Trends about 5 games in need of a reboot, thanks to the success of God of War 4. The one thing the writer forgot to do prior to publishing is researching the content. On this list we have Duke Nukem, which has already been rebooted, and Turok, which is being remastered and the studio has already killed off the idea of a reboot for now. Good job Digital Trends. You're about 1 step shy of being WhatCulture-worthy.

- Speaking of WhatCulture, here's a list of 10 games with glitches and fake-outs that made gamers panic. If you guessed Metal Gear would be on the list, you are correct. Three times no less! Though I do think Ghosts n' Goblins needed a mention given that you have to play the entire game and (spoiler) once you reach the end you realize you're not done. The first round of playing didn't happen and you have to re-play the entire thing again! That was the worst.

- Polygon has an op-ed about how games make quitters out of all of us, and that's okay. The article is worth a read; if anything to help you figure out the type of gamer you are and if you agree with Mac Schwerin's assessment. There are some parts of his piece I agree with, such as there are too many games out there too consume that it's difficult to play them all. Truth. Last March, I was scrambling to get as many new games played to post reviews in a timely manner. So many new, open world, large time-sucking games came out and it was impossible to play all of them to their fullest extent. I have a few that I'm still waiting to get back to and finish. With life, adulting, and other responsibilities taking priority, it's a challenge to play so many games with so few hours in our life. On the flip-side, I don't agree with Schwerin's statement that the ending to most games doesn't matter. While you can pick up on the flow of a game within a few hours, the climax and ending helps provide closure to the cumulative hours you spent playing. In some cases it can be a huge shock and spin your entire world around. Others it might be predictable - and that's fine. To not finish playing because you feel the ending doesn't matter is a bit of a slam against the developers. Why wouldn't you play a game to it's end? Sure it may take you a few years and you don't have to hit 100% completion, but the ending always matters. You wouldn't walk out on the end of 'The Avengers' would you?