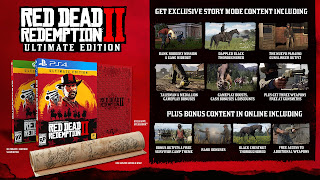 Because this is news and I my fiduciary duty is to report it, we're going to talk about the Red Dead Redemption II pre-order bonuses. Though in fairness, I should point out that I don't like pre-order bonuses. I think they are a horrible way to hook people into buying games that are unfinished, have no reviews, and have promoted the unhealthy purchasing system we have in place today for games. It also makes it impossible to have a "complete" version of a game when multiple variations exist. And you can never truly 100% the content unless you spend gobs of money on Day 1, Extreme Edition to have access to everything. Pre-order bonuses are a scam. We need to stop falling for them.

Now that's out of the way, Red Dead Redemption II! The third game in the Red Dead series, but the second for Redemption, comes to us by way of RockStar. There have been murmurs in the past, but it's officially confirmed with a tentative release date of October 26, 2018. What we've learned from RockStar's latest press release is that Redemption II will have 4 versions of the game available for pre-order: standard, special edition, ultimate edition, and collector's box. And regardless of which digital version you pre-order, you'll get some cash for your GTA5 Online character. Digital only though. If you buy the physical versions, well you're out of luck for now until enough people complain about it.

By pre-ordering any version of the game you'll get a digital horse and a "survival kit" which includes basic health supplies for your character. If you pre-order before July 31st, there's a bonus treasure map that will give you access to secret stashes in the game.

The Special Edition grants you a bonus story and mission, along with a hose, outfit, and gameplay boosts. Ultimate Edition gives you the same content as the Special Edition, plus online content: more outfits, camps, and rank bonuses. The Collector's Box will be a metal, um, box with a lock and key, a challenge coin, double-sided puzzle, a bandana, a map, a pin set, playing cards, cigarette cards, and a weapon catalogue that is a replica of one used in the game. By the way, the Collector's Box does not include the game, nor any of the digital bonuses. It's $99 of random stuff that you may or may not like.

There are so many variations of the bonuses, the price-points, the stipulations and dates for pre-order cut offs...what is happening to our industry? Is this what we're reduced to in order to promote products? How about putting out a game and letting the work speak for itself? "But it's RockStar! They always put out great content." Tell that to Red Dead Revolver. Having a sold game is all the promotion one needs to get customers invested in the product. We don't need all these bells and whistles.
Email Post
Labels: pre-order pre-order bonsues red dead redemption II rockstar rockstar games stop pre-ordering video games