Breaking: President and COO of Nintendo America is Retiring 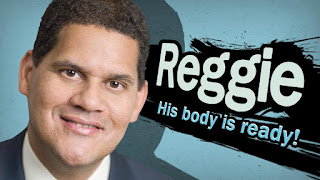 The Regginator is ready to move on from the corporate life of video games.

Reggie Fils-Aimé has been with Nintendo since 2003, and became an unexpected face of everything Nintendo America. Starting out as the Executive Vice President of Sales and Marketing, he quickly became the President and Chief Operating Officer in 2006. His legacy at the company was impactful.

Reggie has always come across to gamers as "that guy who got the dream job." Someone who seems down-to-Earth and was smart about business. He loves video games. He loves talking about video games. He wants games to be all about the players and getting people together to enjoy gaming; not focusing so heavily on the "bottom line." Remember, this is the genius behind the Big Foot Pizza from Pizza Hut. I miss that pizza.

He quickly became a well-known figure in gaming in 2004 by opening up the Nintendo E3 presentation with "My name is Reggie. I'm about kickin' ass, I'm about takin' names, and we're about makin' games." Nintendo may have been iffy about the presentation, but it left an impression. He has become everything meme-worthy, including coining the phrase "My body is ready."

Reggie helped rebrand Nintendo America into a more customer-facing company. Nintendo was transformed as a quality brand for the people.

On April 15, Reggie will be replaced by Doug Bowser. With a similar history to Reggie, Bowser has been the VP of Sales & Marketing since 2015. Yes, we're all aware that his last name is ironic, and Reggie is handing over the keys of the Mushroom Kingdom to Bowser. It's funny. We're waiting on the memes. Mr. Bowser comes from the land of EA and was their VP of Business Global Planning from 2007-2015.