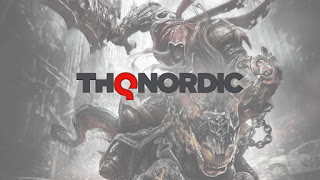 THQ Nordic. What were you thinking?

The publisher of notable games like the Darksiders franchise decided to hold an Ask Me Anything (AMA) yesterday. A popular form of interviewing that started out as a meme, but now you'll find actors, sports figures, and CEO's of major tech companies joining in on this open-form interview. THQ Nordic decided to hold their own AMA, on the website 8chan.

8chan is the "free-for-all" cousin of 4chan. If you thought 4chan was bad, you haven't been to 8chan. If you have a racist grandparent, they would be appalled at what is posted on 8chan. It's that horrific. The founder felt that 4chan became too controlling and created 8chan as an alternative. The content on 8chan was so bad that Google blocked it from it's search function in 2015 for child pornography. When 4chan pushed out GamerGate content, 8chan became their new hub, where many active discussions still take place today. 8chan is the pit of the internet.


the opportunity was here and we took it, we got apporached in a very friendly and polite manner and were assured, said person (shoutout to Mark) will take care of the nasty stuff. so, here we are.
— THQNordic (@THQNordic) February 26, 2019

"Mark" did not "take care of the nasty stuff." The AMA was quickly flooded with pornography, Hitler references, racial slurs, and more. Any fans of THQ Nordic games but unaware of 8chan were quickly greeted with the scum of the internet.

Shortly after the AMA began, THQ Nordic apologized for not properly vetting out the site. They have since removed the original AMA tweet so people would not view the content that was posted on 8chan.

This will have lasting consequences, whether THQ Nordic and the internet wants to believe it or not. We're not "sensitive snowflakes" crying outrage over avocado toast. We're expressing our overwhelming dismay that a company would give any face-time to a hate group.

For THQ Nordic, this is more than a "misstep."