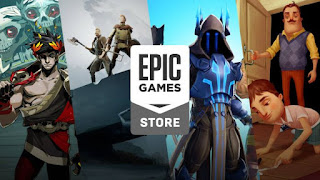 The Epic Games Store (EGS) has been the most divisive video game retailer I have seen in all my years of gaming. This includes putting the store up against the likes of GameStop, WalMart, BestBuy, Amazon, Steam, and Origin. It's a topic I'm seeing in virtually every Discord channel I belong to, and the conversations are actively filling up my Twitter feed.

EGS has been active since December of 2019, with a bold promise to developers that it would only take a 12% cut of profits versus Steam 30%. Some argue that this change will help save smaller developers and publishers from losing money when pushing the product on Steam. It doesn't have anywhere near the numbers of stores like Steam and Discord, but it wanted to try and set itself apart by being more appealing to the game makers. EGS also promise a more curated storefront and optional reviews that developers and publishers could choose to make available for their product. A number of people support EGS. It's had some rough spots with claims of spyware and the current storefront leaves much to be desired. It's not Steam; therefore it won't have the majority of Steam's features.

When EGS initially launched, there were a few exclusive titles from smaller developers. EGS began nabbing some bigger things, such as Walking Dead: The Final Season and The Division 2. And then 2 weeks before the release, it was announced in January that Metro: Exodus would be exclusive to EGS.

The game's page on Steam had been accepting pre-orders for months. Product don't appear at Valve's whim. The developer had to take action to make it visible to consumers. Rather then removing the game from the store, Valve posted an update on the game's page regarding the last minute change
and the publisher was punishing gamers who opted for Steam to order their products. A work-around was made for pre-orders so those who purchased on Steam would still access the game and any and all future downloads/updates. New sales are not available. The note from Valve is still up.

Valve was right on this situation. Allowing customers to pre-order the product for months and taking it away 2 weeks before release is an irresponsible way to run a business. It would have been in the publisher's best interest to maintain the original release set-up, and the next "big game" they want to push, start with EGS from the get-go. Don't leave your customers in a lurch. While Steam customers who pre-ordered Metro: Exodus will have access to updates, it would not be a surprise if Steam were last on the priority list.

And then Borderlands 3, a highly anticipated game to the franchise, was announced to be an EGS exclusive for the first 6 months of sale on PC. No Steam. No Origin. No other online storefronts for digital products can carry it. For 6 months. This resulted in continued review bombing on multiple review sites (mostly Steam pages) in an act to get developers and publishers to listen.

The way Epic Games and EGS has handled the launch of the store has felt unsettling. The current format with maintaining exclusive rights to AAA and large-developer games is short-sighted. Today's world is about choices. If I want to buy a copy of Fallout 4 for a friend, I can go to a myriad of retailers for the PC version, including Steam and direct from Bethesda. There are options. EGS doesn't provide options in it's current state: you buy the game from them or not at all. And even though one could argue that Blizzard and EA do the same, you can still get a PC copy of Overwatch from any gaming retailer and install it. You don't have to buy it directly from Blizzard. You'll have to play Overwatch through their desktop app, but the purchase options are endless. EGS is currently restricting that. Hopefully that will change.

"Exclusive titles on one platform" is a marketing method that is steadily dying out. We saw how much people reacted to Sony maintaining it's no-cross platform play stance for products like Fortnite, that developers like Bethesda opted to withhold game releases until Sony started playing fair. This mindset of being the only platform to play, the only method to game is no longer the norm. This is not how gamers in 2019 think. We have the ability to access almost any game we want, from any system, at any time. Thanks to technology we're no longer boxed in. That's one of the reasons why some are upset at EGS. It's trying to contain us when there is no reason to do so. The ability to make your own choice as a consumer always matters. We want to choose what platform and method we buy our games. We don't want the choice to be limited for us.
Email Post
Labels: borderlands 3 epic games epic games store exclusive games metro: exodus steam the problem with exclusive games valve