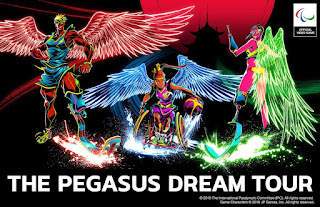 It's time for a Weekly Link Round Up! We had to take a little bit of a break as the news cycle was repetitive over the past 2 weeks. But this time we have new stuff. Yea! It's a collection of the best, worst, and weirdest gaming news on the internet...this week! Here's what we've got:

- The first Paralympic Video Game is going to be made by the former director of Final Fantasy XV! Hajime Tabata left SquareEnix roughly 5 months ago to peruse another project, which ended up cancelling the remaining DLC for FF15. Now we know what it is. The Pegasus Dream Tour developed by JP Games is to help increase the engagement and interest in the Paralympics. The sports role-playing game will take place in a fictional area known as Pegasus City. Players can awake their special abilities in an alternate Paralypics world. The game will be available on multiple platforms, including mobile. No release date has been announced, but it should be out before the 2020 games.

- Even the LA Times is now talking about the video game business unionizing. Writer Sam Dean reviews sessions held by Games Workers Unite (GWU) at the Game Developers Conference last month. Each of GWU talks began with a wonderful phrase: "Damn the man." Which is more than appropriate given the working conditions many in the gaming industry face. And 2019 seems to be the year that people in the tech world are gathering the courage to do something. Amazon and Microsoft employees have been pushing back against executives for their companies' ties to the military and police for abusing their technology. Kickstarter announced plans to unionize last month. Check out the article for the full story. It's worth your tim.

- In non-breaking news from a blog called Fatherly: kids who play a lot of video games are at an increased risk from finger and wrist pain. Don't let the shock sink in too quickly. The post links to a 2009 WebMD article, so you know we're talking about a quality piece of journalism here!

Parents and legal guardians, here's the the reality: if anyone, child or adult, does something too much, they are at an increase risk of injury. Basketball, ballet, football, theater, art, working on cars - yes you can get injured with hobbies. Video games are no different. Set limits and be active in your child's health. This is not rocket science.

- Disney announced the details of their new Disney+ streaming service, which will take some movies and TV shows away from Netflix, Hulu, and Amazon. And it's one more thing people will have to pay for, if they like their Disney movies that is. Hint, hint: Disney owns Marvel. So we know what's going to happen.

Part of that announcement was no announcement on video games. Games will not be part of the service. Why? Because the focus is on movies and television. Not games. But GameSpot tried to needle in that question anyway.

- YouTuber Enigma is taking a walk in the world of video games, providing time lapse recordings of his journey. The downside with the timelapse is that you don't see the beauty of the game. The upside is that a 2 hour walk is cut down to 3-4 minutes. It shows the vastness of these worlds that have been developed. While also makes us consider stripping down games to focus on 1 or 2 locations to provide more depth to the story. Watch one of the videos and tell us what you think in the comment.
Email Post
Labels: disney disney+ enigma paralympic video game the pegasus dream tour union video game union walking in video games weekly link round up