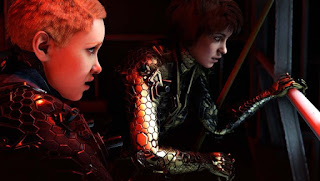 One of the things I look forward to at the end of E3 is the analysis of the games shown to us during main stage presentations and in the expo hall itself. There are a ton of small and mid-sized developers with games you won't see on the main stages because they don't have Nintendo/Microsoft/Sony money to pony up for that type of showcase.

Being on the big stage acts as a microcosm of what the business is expecting to be the top sellers for the coming year. Other developers follow suit in order to stay relevant on the market. Which has unfortunate side effects when one realizes how little diversity and individuality play a role in these presentations.

Since 2015 Feminist Frequency has posted a gender breakdown of the games at E3. Each year the format is tweaked to provide the best representation to the main developers showcased, while providing insight into how far we still have to go in order to see more diversity in our games to properly reflect their customer-base. These breakdowns only focus on the main conferences, because those are the events that the majority of people will be watching. They're not going to see indie events because it's not broadcasted. As such, games on the show floor are not included unless they are in the big presentations.

Why is this breakdown necessary? If we expect video games to maintain relevancy as an entertainment medium, they need to grow. How does one grow? They change. Change is not a bad word and it doesn't meant that your video games are going to be taken from you. There will always be Call of Duty and Halo (when will this franchise end?) for your shooty-shooty, bang-bang titles. Introducing diversity will help stimulate gaming by allowing old and new faces to feel more included in the discourse. That's a good thing. This is how we get better games. It's how we got better movies, TV shows, plays, musicals, music, books, etc.

While the gender breakdown is not live on the Feminist Frequency website yet, you can catch a glimpse on Wired. There is a comparison from 2015-2019 on how the games presented on the main stages fared. On the plus, the ability to choose your gender in a game has improved over time. The "straight white male" default option may be the starting choice, but you can replace it with a woman and PoC (in some cases). This is up to 66% this year compared to 50% of games last year. The rest of the stats are not so great with only 5% of games showcasing a female lead and 2% are gender ambiguous.

The report also covers the presenters: how many were men and how many were women? While women made up 21% of the speaking role, some events like Bethesda with 17 speakers, only 2 were women.

With the exception of the choose-your-own-character option, the stats have not been good for women and PoC these past 5 years. What does it mean? It means that there is still work to be done. Adding diversity, individuality, uniqueness to games won't destroy them. You can have games like Horizon Zero Dawn be compelling, Triple A titles. Developers don't have to stick to the same bam-bam, shoot 'em up titles of CoD to be noticed. Variety is good. Diversity is very good. Let's make some changes and bring more people into gaming by giving them choices!
Email Post
Labels: diversity diversity in video games e3 e3 2019 e3 2019 gender breakdown female characters feminist frequency gender breakdown wired women in video games