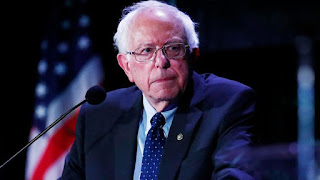 Let that sink in for a moment. Indeed, the internet is an odd place.

His campaign launched the channel yesterday but details on what will be streamed are unknown. Obviously there will be political content as he works towards becoming the Democratic Presidential Nominee for the 2020 U.S. race.

But Sanders doesn't have to make his streams political. Since Twitch is open to loads of different types of streaming, he could make a table, cook, sing, or play a video game.

For Sanders, this move to Twitch is not that unusual. He is one of the few U.S. political figures that has embraced technology. He has a podcast. His campaign was one of the few to be very active on social media in it's early days before other politicians began to utilize it. This is a man with a smart team whom understand that to get people to vote, you have to go to them. Streaming on Twitch would be another, more accessible method of reaching out to younger voters.

As of this post, his channel has nearly 9,000 followers, which puts him in Affiliate status. Maybe we'll be graced with custom Bernie emotes. No videos have been posted. He currently follows only one other channel: The Washington Post.
Email Post
Labels: bernie sanders bernie sanders on twitch politics twitch twitch streaming