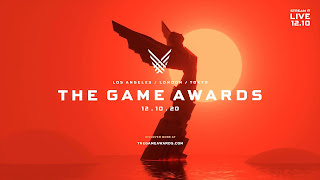 Nothing will stop Geoff Knightley's 'The Game Awards.' Not even a pandemic. Airing on December 10th this year and foregoing an audience to have 3 in-studio locations in Los Angeles, Tokyo, and London to broadcast the show. For reasons.

But we're not talking about that today. The nominations were announced.

The Game Awards missed the mark entirely with their selections.

This blog has been pretty good about not shoving the "they probably got paid off" moniker that is often the focus on review websites that give questionable games a great score. Seeing The Last of Us 2 headline most of the categories, it definitely raises some questions.

According to the FAQ, the nominees are selected by over 95 journal outlets and influencers. These range from The Hollywood Reporter to Game Informer (yes, that magazine owned by GameStop to promote AAA titles and used games to push the company's agenda) and What Culture. Yeah. The satirical list site is one of the outlets that selects nominations. The final nominees are put forth based on the number of votes from the outlets. The final votes for winners is 90% from The Game Awards voting panel (not their advisory board) and 10% from fan votes.

The one nice thing about The Game Awards has been the inclusion of smaller, independent titles. And this is seen again with Super Giant's Hades steamrolling out of nowhere over the past month to snatch 9 nominations.

But the nominations always fall short on adhering to the event's rules. Only games that are released within the past calendar year should be allowed to contend for the award. For Best Multiplayer of the Year and Mobile Among Us is listed. However, this game was released in 2018. The Game Awards has a history of not following their rules and excluding entire categories of games for, again, reasons (see Best Ongoing Game, which once again only pulls in Destiny 2 and completely ignores the myriad of MMO's in existence that have a stronger presence).

The nominees for Game of the Year have some predictable titles (Animal Crossing, Ghosts of Tsushima) and questionable options. Specifically Doom: Eternal and The Last of Us 2. Games with meh critical scores, and a general average-to-negative outlook by players. TLoU2 having a Best Game Direction nomination is insulting and we can only hope that the judging panel gives everything to Ghosts of Tsushima; a title that is masterful in art, combat, story, character, and pacing. Also "Best Game Direction" probably shouldn't go to a studio that emphasizes crunch time.

2020 was not bereft of games. One of my favorite games this year is Parkasaurus, with a whimsical art style and one of the most friendly management simulations I've ever experienced. And what happened to Sea of Thieves? People are still raving about this game, but not a single nomination. There were a lot of fun, smaller titles out in 2020 in-between the behemoths that ravaged March and April (looking at you Animal Crossing and Final Fantasy 7 Remake).

We can only hope the judging panel will see that these nominations are pretty bland, with the exception of a few bright spots, and keep the low-tier AAA titles out of the running.